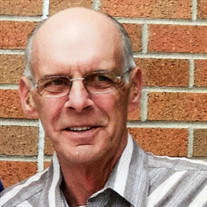 Wayne L. Stone, Jr, 72 of South Boardman, passed away on October 15, 2020 at Munson Medical Center in Traverse City. Wayne was born on October 8, 1948 in Detroit, Michigan to the late Wayne and Joyce (Hanley) Stone. He married Marsha Stone on May 6, 1967. Wayne had many jobs in his lifetime and took pride in working hard at everything he did. This was evident in his many jobs that included working as a sales manager, as a safety consultant and working at Turtle Creek Casino. He also owned a gun business with his son called Stoney’s Firearms. Wayne also had a 35-year career in the oilfield where he was well respected by his peers. Wayne loved going to the casino with his wife Marsha. In his earlier years he enjoyed dancing with his wife, the outdoors, fishing, hunting and morel picking. One of his greatest loves was riding motorcycles with his brothers and his sons. He also loved going to yard sales and gun shows. Wayne always had a good story to tell and was very funny. He always bragged that he was undefeated in finger wrestling. Wayne is survived by his wife of 53 years, Marsha Stone, his lifelong friend Denny Chupp, his children, William (Judy) Stone of South Boardman, Jeff (Nancee) Stone of South Boardman, Tonya (Tim) Tinker of Traverse City, his grandchildren, Tyler Tinker, Amy Stone, Thomas Tinker and Christy Stone, his siblings, Jerry (Connie) Stone, Jim (Renee) Stone and many nieces and nephews. He was preceded in death by his parents and his sister Bertha Birgy. Celebration of Life will be held on November 7, 2020 at the VFW Post, 408 Hyde Street, Kalkaska, MI 49646 from 2-4 PM. The family is being served by Kalkaska Funeral Home and Cremation Services.

The family of Wayne L. Stone Jr created this Life Tributes page to make it easy to share your memories.

Send flowers to the Stone family.