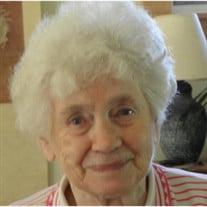 Vernette Cauchy passed away on July 19, 2020 in Traverse City at the age of 102. She was born Vernette Marion Bjurman in Barron, Wisconsin on May 31, 1918. She was the first born of Swedish immigrant mother, Helen (Stromberg) Bjurman and Swedish American father, John Bjurman. Her early life in Barron, Foxboro, Wisconsin entailed hard work on the farm because she was the oldest, and no male children came along until later. Working in the fields, filling the barn with hay, and milking the dairy herd filled many of her days. During those times, in the winter, she and her siblings would ski to school. She said it was the shortest and fastest way to and from school. Attending high school meant leaving her family and traveling to the Duluth/Superior area. There, Vernette and her sister Fern, roomed in a boarding house and returned home when possible. She also lived a short time in Milaca, Minnesota and was a grocery store clerk in Minneapolis, Minnesota for a year. With the advent of World War II, Vernette journeyed to California, where she was employed by Lockheed in the building of the P38 Lightning fighter aircraft. She always saw it as the most beautiful aircraft. While in California, she would meet her future husband, Charles. After he returned from the war in Europe, they married and settled in Ketchikan, Alaska. Salmon fishing and friendships were good but with three children in tow, the family moved to Michigan to be closer to family. Living on a farm near Holland, Michigan, felt very familiar to Vernette. Large family gatherings and reunions were had and, during the summer, beautiful days at the Lake Michigan beach. She saw her children work in the family garden and roam the woods and learn how to ride bicycles on gravel roads. Soon, she and her husband Charles would take a leap into the business world with a move to Dundee, Michigan. There, they purchased a small butcher shop and store and over several years, built it into a thriving supermarket. With her adept math skills (her husband Charles would say she was much better than he was), she helped guide the accounting and success of the business, while working tirelessly in both the business and raising her family. Vernette enjoyed her many friends and was socially active in the community, especially for helping develop the town’s sesquicentennial celebration. Upon selling the supermarket, Vernette and her husband and youngest child, daughter Maureen, moved to Fife Lake, Michigan, building a home on old family property. Vernette was very active and had many friends. She was a longtime member of the North Paradise Flower Club and St. Aloysius Alter Society. She also sang in the church choir for many years. She maintained her ceramic painting craft and traveled around the state with a ceramic painters’ group. Her talent in capturing the life and beauty of a flower or a bird was exceptional. Her love of nature was complete. Her animals, inside and out, were her babies. The birds, squirrels, deer, and other animals were always well fed and protected by her. Speaking to this, she ensured her 80 acres of forest and wetland beauty to the Land Conservancy. Vernette was an avid reader and consumed news from local to international and could easily be drawn into a political or geopolitical discussion up to the day of her passing. She could not go to bed without watching the 11:00pm news. Given her loving nature, even a heated discussion was bathed in peace and love. She lovingly tended her indoor plants and outdoor gardens. During canning season, she would ‘put up’ dozens of quarts of tomatoes (from the garden), peaches and other delights to enjoy in the winter and give away to her family. As a mother, grandmother, and great-grandmother, she was totally devoted to her children. She tended to and encouraged their intellectual, spiritual, and emotional growth. This woman was all love. All children and grandchildren that came to her either biologically or by marriage were HER children and were loved completely. She is with the Lord Jesus and the Father now. In the spiritual realm, she joins her parents, Helen (Stromberg) Bjurman and John Bjurman, her husband Charles, her oldest son Robert, and daughter-in-law Peggy (Wacha) Cauchy. She also joins her sister Vivian Bjurman, brother John Bjurman, sister Helen (Bjurman) Excel, and brother Phillip Bjurman. She leaves behind her sisters , Fern (Bjurman) Woodcock Elmore, Clarice (Bjurman) Griffin, children, Charles (Marcia) Cauchy, Mark (Geri) Cauchy, Kim (Christine) Cauchy, Matt (Ellen Kohler) Cauchy and daughter Maureen (Cauchy) (Brooke) Kaule, as well as grandchildren Bryce Cauchy, Zachary Cauchy, Caitlin (Cauchy) Bowden, Emma Cauchy, Hart Cauchy, Teresa Lenaerts, Adele (Cauchy) Copfer, Corinna Cauchy, Philip Kaule, Scott Kaule, Melissa (Kaule) Hilgendorf, Anna Cauchy, Peter Cauchy, Marcio Silva, Michelle Silva, Natasha (Throop) Hegarty, Zinzi Shaw, Tajin Robles and great-grandchildren Ellis Bowden, Effie Bowden, Julia Silva and Aisha Smith. Vernette also leaves behind sister-in-law Jacqueline Bjurman, Mary Ann (Cauchy) Heading, brother-in-law Howard Heading and many loving nieces and nephews. In lieu of flowers, donations may be made to St. Aloysius Catholic Church or the Cherryland Humane Society.

Vernette Cauchy passed away on July 19, 2020 in Traverse City at the age of 102. She was born Vernette Marion Bjurman in Barron, Wisconsin on May 31, 1918. She was the first born of Swedish immigrant mother, Helen (Stromberg) Bjurman and... View Obituary & Service Information

The family of Vernette M. Cauchy created this Life Tributes page to make it easy to share your memories.

Send flowers to the Cauchy family.