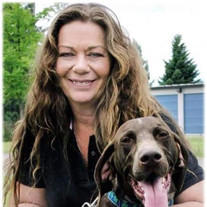 Vala Dee (Igo) Shipman, 56, passed away on Tuesday April 6th, 2021 due to ALS. Vala made Kewadin, MI her home. Vala was born in Chickasha, Ok to John L. Igo and Carroll Atkinson on July 9, 1964. She was the oldest of five children and raised in Cement, Oklahoma. She graduated high school a year and a half early from Northwest Classen in Oklahoma City. At the age of 16 Vala moved to Texas to live with her mother. There she met the father of her twins, Scott Shipman. In 1998 she moved to Michigan to be closer to her mother and grandparents. During Vala’s life she pursued opportunities in modeling, accounting and at a lawyer’s office in Texas. Her passion landed as an EMT and firefighter for Torch Lake Township. Vala had many hobbies which included horseback riding, gardening, a heart for animals, and rock painting. She loved spending time with her family, going to the beach at Torch Lake, taking photos of sunsets and finding Petoskey stones. Vala will be greatly missed by many. Survivors of Vala’s family include: her father John L. Igo of Cement, OK; step-mother Linda Brasee of Cyril, OK; son Brent Shipman and granddaughter Keira Shipman of Kewadin, MI; Kara Shipman and granddaughter Hadley Hulburt of Rapid City, MI; siblings: sister Christa Campbell of Cyril, OK; brother Russ Igo of Anadarko, OK; sister Jill Akin of Midland, TX; and sister Nikki Kraham of Blanchard OK; aunt Lisa Stevenson of Elk Rapids, MI; aunt Betty Jameson of Wichita KS; many nieces, nephews, cousins and her beloved dog Misty Blue. She was preceded in death by her mother Carroll Lyn (Atkinson) Cato; grandparents Edward and Barbara (Allen) Atkinson and John M. and Susie Myrtle Igo; great-grandparents Clarence and Mildred Allen; many aunts and uncles. A Celebration of Life will be held for Vala on Thursday, April 8th, 2021 at 3pm under the pavilion located in The Torch Lake Township Day Park. Arrangements have been entrusted to Kalkaska Funeral and Cremation Services.

Vala Dee (Igo) Shipman, 56, passed away on Tuesday April 6th, 2021 due to ALS. Vala made Kewadin, MI her home. Vala was born in Chickasha, Ok to John L. Igo and Carroll Atkinson on July 9, 1964. She was the oldest of five children and raised... View Obituary & Service Information

The family of Vala Dee (Igo) Shipman created this Life Tributes page to make it easy to share your memories.