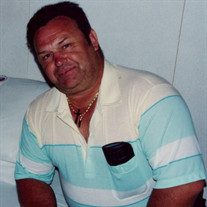 Thomas “Larry” Fisher, 74, of Kalkaska, passed away on April 7, 2018. He was born on June 8, 1943, to the late Ramie and Ola (Harris) Fisher in Lawrenceburg, TN. Larry proudly served in the United States Army from 1961-1965, after that he became a truck driver and retired from Chrysler. During his life he raised pulling mules, and became a member of the Quarterhorse Association. He was known for coaching baseball and heading up an annual golf scramble in Northern Michigan. After retirement Larry and his wife moved to Northern Michigan to enjoy the great outdoors. Larry loved to hunt, fish, golf, bowl, watch birds and fly radio controlled airplanes. He was a wonderful husband, dad, papa and friend who will be greatly missed. Larry will be remembered by his childhood sweetheart and wife of 53 years, Eylan (Stengel), his sons; James Fisher, Thomas (Christina) Fisher, Scott (Samantha) Fisher and Kevin Fisher, grandchildren; Brandy, Brittany “Tigger”, and Tommy “Taz”, his siblings: Jean (Joe) Brumfield, Darrell (Kim) Fisher and Roy (Donna) Fisher, his best friends; Bob (Rosie) Marschs and his cherished poodle Cece. Larry was preceded in death by his parents, sister Sherry, and beloved poodle Skylar. A Memorial Service will take place at Sujkowski Funeral Home of Rossford, Ohio on Wednesday, April 11, 2018 from 4-7 on with service immediately following. Memorial contributions may be made in Larry’s honor to the Special Olympics of Michigan or Hospice of Michigan. Arrangements entrusted to Kalkaska Funeral Home and Cremation Services.

The family of Thomas Larry Fisher created this Life Tributes page to make it easy to share your memories.

Send flowers to the Fisher family.