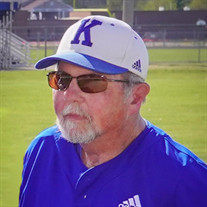 Terry Eugene England, 72, of Kalkaska, MI passed away on Tuesday, July 27, 2021. Terry was born May 26, 1949 in southern Illinois to the late Gene and Jerri England. Terry met his wife Donna in Flora, IL in 1973 and they wed after 6 months of dating. He attended Southern Illinois University to study forestry but transitioned to a career with the company formerly known as National Oilwell. Upon his retirement in 2014 he had completed 43 years of faithful employment. Terry’s job took them from Illinois to Ohio, Pennsylvania, and finally settling in Kalkaska, Michigan in 1985. During their 48 years of marriage, Terry & Donna raised four children, Jodi, Julie, Josh & Jon. This led him to be the proud Grand Papa of 14 grandchildren and if you spent any time with Terry you surely witnessed this pride. Another thing you surely witnessed if you spent time with Terry was his love for baseball. He started coaching tee-ball when Josh was old enough to play and continued his coaching streak for the next 35 years. This includes coaching with Kalkaska High School for the last 24 years, he was never more in his element than when he was at the baseball field. Terry was an involved member of Kalkaska Church of Christ. He was a dedicated husband, father, grandfather & coach whose warm smile made everyone who encountered him feel welcome. Survivors honoring Terry’s legacy are his wife Donna, daughter Jodi Shields & husband Cameron, daughter Julie Buckham & husband David, son Josh, son Jon & wife Liz England along with his grandchildren Bobby, Ryan, Aubin, Mickey, Micah, Isaac, Shiloh, Carter, Annabelle, Edi, Crosby, Henry, George, & Daisy, and several cousins & nephews. The family will receive friends on Thursday July 29th 4-8pm & 10-11am Friday July 30th at Kalkaska Church of Christ. Funeral services will be Friday July 30th at 11am with a graveside internment to follow. Memorial contributions in lieu of flowers can be made to Kalkaska Church of Christ. Kalkaska Funeral Home is handling all arrangements.

Terry Eugene England, 72, of Kalkaska, MI passed away on Tuesday, July 27, 2021. Terry was born May 26, 1949 in southern Illinois to the late Gene and Jerri England. Terry met his wife Donna in Flora, IL in 1973 and they wed after 6 months of... View Obituary & Service Information

The family of Terry E. England created this Life Tributes page to make it easy to share your memories.

Terry Eugene England, 72, of Kalkaska, MI passed away on Tuesday,...

Send flowers to the England family.