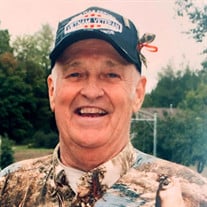 Terry Lee Case, 76, of Kingsley, passed away suddenly on Saturday, December 19, 2020. Terry was born at home in Kingsley on Nov. 19, 1944 to the late Guy and Mary (Perhall) Case and had been a life resident of the area. Terry married Sharon Sue (Newmarch) Case on October 7, 1967 at Bethany Baptist Church in Traverse City. Terry worked for the Grand Traverse County Road Commission for over 30 years, during which time he also volunteered as a firefighter for Grand Traverse Rural Fire Department as well as serving as a Reserve for the Sheriff's Department. Terry graduated from Kingsley High School in 1963, where he excelled in baseball and basketball, and was then drafted into the Army. He proudly served during Vietnam and was stationed in Udorn, Thailand. Terry was an innovative, hard working man whether it was his large gardens that he enjoyed keeping or fixing something around the house, he even took up knitting in his spare time. Terry loved the outdoors; camping with friends and family, going fishing, and hunting deer and turkey were most important to him. He will be fondly remembered for his big hugs, a dry sense of humor, and the way he would tease you and make you feel like family. He was so proud of his boys and his grandkids and could often be heard talking about how great they were. Terry is survived by his wife of 53 years Sharon; sons Aaron (Trisha) and Daryl (Renee); grandchildren: Allen (Jessy), Brandon, Bryan, Allison, Tyler, and Dylan; great grandchildren Bryce and Anaya; sister-in-law Phyllis Case; and numerous nieces, nephews and friends. He was preceded in death by his son Patrick, and siblings: LaVerne, Beatrice, Herbert, Merle, and Lyle. A private service will be held at 1:00 pm on Wednesday, December 23rd and will be live streamed, please visit www.kalkaskafuneralhome.com. A graveside service will follow where friends may join to pay respects at 3:30 pm at Barnum Cemetery in Mayfield. A celebration of Terry’s life will also be held next summer out at the Boardman River. The family is proudly served by his loving grandson at Kalkaska Funeral Home. Memorial contributions may be made in Terry's honor to the TLC Foundation, to support AED's for 1st Responders, please make checks payable to DLC Educating, PO Box 1457, Kalkaska, MI 49646 Livestream Service at the link below - https://www.youtube.com/channel/UCd5ytWq5FzfG45UOfMJwqFw

Terry Lee Case, 76, of Kingsley, passed away suddenly on Saturday, December 19, 2020. Terry was born at home in Kingsley on Nov. 19, 1944 to the late Guy and Mary (Perhall) Case and had been a life resident of the area. Terry married Sharon... View Obituary & Service Information

The family of Terry Lee Case created this Life Tributes page to make it easy to share your memories.

Terry Lee Case, 76, of Kingsley, passed away suddenly on Saturday,...

Send flowers to the Case family.