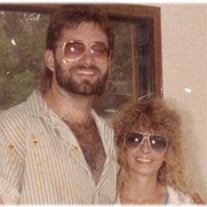 Sheryl Renee (Ramey) Curry, 56, of Kalkaska, Michigan passed away along with her husband of 38 years, Brian William Curry on January 23, 2020 at their home. Sheryl was born on December 1, 1963 in Columbus, Ohio to the late Norman Paul Ramey and Joyce Ann (Pfost) Lynch. Sheryl is survived by her daughter Molly (Romaine) Watts, son-in-law Jay Watts and two grandsons James Spencer Watts and Owen William Watts. She is also survived by her siblings, Stephanie (Nathan) Smith, Richard (Krystal) Lynch Jr, and Donna (Thomas) Higgins and several nieces and nephews. Sherry, as she preferred to be called, moved with her family to Louisiana during her middle school years. In school, Sherry seemed to have a natural music ability and learned to play many different instruments, among them were the accordion and clarinet and was in the Broadmoor High School marching band. After Sherry and Brian married, 25 July 1981, they eventually moved to Florida, where they lived for many years. After several trips to visit family in Michigan, they decided to move there. Sherry and Brian were inseparable. Their love and respect for each other carried them through anything and everything. Sherry and Brian began creating one of a kind wooden clocks and furniture under the name of Burl Art. They were hired to create special pieces for individuals as well as businesses. Sherry always had a love for animals. Over the years, she became a strong advocate for animals. She started and joined several groups to save animals in need, and is considered by many to be a warrior for animals. Mass for Brian and Sherry will be held at 11:00am on June 8, 2020 at St. Ignatius Loyola Catholic Church. They will be laid to rest in St. Ignatius Cemetery in St. Ignace, following the mass. An urn for Brian and Sherry has been designed, handcrafted, and donated by Woodland Creek of Kalkaska.

Sheryl Renee (Ramey) Curry, 56, of Kalkaska, Michigan passed away along with her husband of 38 years, Brian William Curry on January 23, 2020 at their home. Sheryl was born on December 1, 1963 in Columbus, Ohio to the late Norman Paul Ramey... View Obituary & Service Information

The family of Sheryl R. Curry created this Life Tributes page to make it easy to share your memories.

Send flowers to the Curry family.