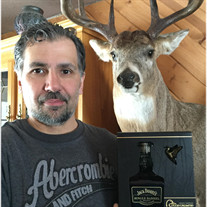 Hundreds of people gathered on October 19, 2019 to celebrate the life and legacy of Scott Anthony Luca. Scott, 52, unexpectedly passed away at his home on Monday, October 14, 2019. He is survived by his wife Nancy Luca (McCool), parents Ronda and James, 3 children Megan, Danielle, and Scooter, 6 grandchildren, brother Shawn, and grandmother. Even though Scott was a small-town guy he lived larger than life. Scott worked at Coding Products for his entire career and became a jack of all trades. If anyone ever needed help or something fixed people would say, “Call Scott.” He traveled to Nebraska, Canada, and all over Michigan looking for the next big buck. Many stories have been told over the years about hunting camp and hanging with “the boys,” that will help the memory of Scott live on forever. He enjoyed camping in the U.P. with family and friends. He spent time hiking Tahquamenon Falls, biking in Marquette and relaxing by the campfire with a Jack Daniels in one hand and a hobo pie in the other. During the gathering on Saturday fellow motorcyclists shared stories about how competitive and inspiring Scott was and how Jack Pine will never be the same without him. His iron-willed character and endless determination made him a hero to many. Scott was the most authentic person you’d ever know. Besides being an avid outdoorsman and incredible competitor, Scott was first and utmost a family man. Family reunions and Sunday dinners will never be the same without the smell of his infamous smoked ribs and his adventurous personality. Scott took great pride in his strong family upbringing and frequently reminded us how lucky we were to have such a close-knit family. Scott would always say, “Family First!” and he loved his family with all his heart. Scott was part of many small communities throughout his life and the amount of people and support given to the Luca family over the last week is a true tribute to how Scott affected so many lives. He will be greatly missed, but with memories of: hunting and watching his son play hockey, walking his daughters down the aisle, camping with his grand kids, riding the Harley with his lovely wife, hunting, fishing and racing with his brother, riding on the quad with his “BZ” down to his parents to see his grandma and have a sweet treat and a drink will help keep Scott alive in our hearts. Contributions and support can be sent to gf.me/u/v3p98g to help provide family the opportunity to rest and heal from this tragic loss. Thank you all for your love and condolences through this difficult time. We are so blessed! “Just 'cause I'm leavin' It don't mean that I won't be right by your side When you need me And you can't see me in the middle of the night Just close your eyes and say a prayer It's okay, I know you're scared when I'm not here But I'll always be right there Even though I'm leavin', I ain't goin' nowhere” By Luke Combs- Even Though I’m Leaving

Hundreds of people gathered on October 19, 2019 to celebrate the life and legacy of Scott Anthony Luca. Scott, 52, unexpectedly passed away at his home on Monday, October 14, 2019. He is survived by his wife Nancy Luca (McCool), parents Ronda... View Obituary & Service Information

The family of Scott Anthony Luca created this Life Tributes page to make it easy to share your memories.

Send flowers to the Luca family.