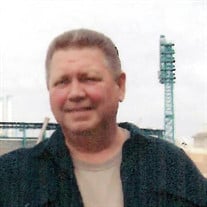 SOUTH BOARDMAN – Samuel Thompson. 68, died peacefully on Thursday evening, October 22, 2020 at Munson Medical Center with his wife and son beside him. Sam struggled with renal and bladder cancer for nearly two years, but succumbed to pulmonary complications. He was born August 23, 1952 at Saratoga Hospital in Detroit, the second child of Samuel Thompson II and Marjorie Johnston Thompson. Raised in Madison Heights, he also attended school there. Prior to his graduation, Sam quit high school and enlisted in the United States Army where he served with the Army Engineers. In 1971 he was wounded in action in Vietnam and discharged honorably. Returning home, he worked various jobs including carpentry, drywall installation and repair, and as a high-lo driver at Forming Technology in Oakland County. In 1986 Sam met and fell in love with Margie Shultz, formerly of Port Hope, MI. The two were united in marriage and spent 33 happy years together as best friends and marital partners. The couple moved to South Boardman in 1988 where Sam continued in the carpentry field. In 2001 he graduated from Northwestern Michigan Community College in Traverse City, earning an Associate Degree in applied science. He was later hired as a mail processing clerk at the Garfield Processing and Distribution Center in Traverse City, retiring from the Postal Service in 2007. Since then, Sam has enjoyed spending time with his family and travelling throughout Michigan, especially the short “road trips” to Turtle Creek Casino where he thoroughly enjoyed spending time playing the slots and socializing with the staff, whom he considered to be friends, for the way he was treated with respect, good times and plenty of laughs. Sam was preceded in death by both his parents; sons Jason and Todd; and brother-in-law James Cinader. He is survived by his wife Margaret of South Boardman; son Raymond (Molly) Thompson also of South Boardman; son Joshua (Cheyenne) Thompson of Tennessee; grandchildren Grace and Isaac Thompson; sisters Marjorie (Dale) Edwards, Sharon Cinader, and Patricia Moreno; and brother Steven (Denise) Thompson. He also leaves behind numerous nieces and nephews, in-laws, and close friend Douglas Gaultier whom Sam considered his brother. Cremation is taking place. Per Sam’s request there will be no funeral. A gathering of friends sometime in the coming months is being planned. In lieu of flowers, the family has requested friends and family to make a donation of their choosing to the charity of their choice, or to The Father Fred Foundation; Michigan State University College of Veterinary Medicine Lucky Fund for Needy Animals; or The Judy Gonyeau Shultz Nursing Scholarship at Schoolcraft College in Detroit. Contact information for these charities may be found online. The family extends their deepest appreciation and respect to all the healthcare providers and workers of Kalkaska Memorial Health Center, Kalkaska Medical Associates, Kalkaska and Boardman Ambulance Services, Cowell Family Cancer Center, Munson Medical Center, Bay Area Urology and to the wonderful and caring staff at Colonel Demas T. Craw VA Clinic in Traverse City. Arrangements have been entrusted to Kalkaska Funeral Home and Cremation Services.

SOUTH BOARDMAN &#8211; Samuel Thompson. 68, died peacefully on Thursday evening, October 22, 2020 at Munson Medical Center with his wife and son beside him. Sam struggled with renal and bladder cancer for nearly two years, but succumbed to pulmonary... View Obituary & Service Information

The family of Samuel R. Thompson III created this Life Tributes page to make it easy to share your memories.

Send flowers to the Thompson family.