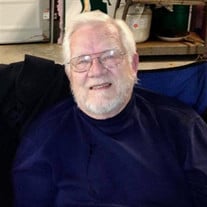 Samuel Oluf Lewis enjoyed life’s simple pleasures, whether it was fishing on Island Lake, bowling with his wife, or joining her to entertain their many friends in the family’s basement bar, The Nail Hole. Samuel passed away on January 30 at the age of 83. His smile, his ability to listen, his gentle spirit, and the hugs that he never hesitated to give are part of his legacy. He is survived by his sons, John (Jan), Samuel Edward (Ruth), and his daughter, Sheri (Duncan) Paschall; and by his sister, Evelyn (Ron) Bishop. His wife, Mary Lee, died in 2012. He is predeceased by his parents and by siblings Betty (Bob) Dunham; Delwin (Lucille); and Dixie (Raymond) Short. Samuel was born on August 5, 1935, in Sigma, the son of Emma and Raymond Lewis. Known in the yearbook as “Rapid Sammy” because he ran track, Sam graduated from Kalkaska High School in 1953. He began taking classes at Northwestern Michigan College and joined the Air Force in 1954, achieving the rank of Senior Master Sergeant. He was a medic and served in Vietnam in 1967 and 1968. He married Mary Lee Cecil in 1956, when he was living on Barksdale AFB in Louisiana. The pair moved several times, including to Offutt AFB in Nebraska, Scott AFB in Illinois, and Mountain Home AFB in Idaho. He and Mary Lee and their children returned to Kalkaska in 1977, where both lived the rest of their lives. After retiring from the Air Force, he worked as the superintendent of the Kalkaska School District bus garage and then as Assistant Manager at Glen’s market. Through his work, he became one of the most familiar faces in the community. He cared about Kalkaska and couldn’t say no when asked to lend a hand, including serving on the Village Council. Sam doted on his grandchildren, Chris Wagenschutz, and Robert (Nikki), Amanda, Joshua and Travis Paschall. He was fortunate to spend Christmas 2018 with his great-grandchildren, Ellie and Ari Paschall, and witness the delight on Ellie’s face as she opened her gifts. He was a guiding light to his children. Samuel Edward shared, “I remember Dad saying you do what you think is right, but…fill in the blank. He wanted me to make my own decisions, but also to learn from his experience.” Sam was trusted family advisor, taking an interest in those he loved. His son-in-law, Duncan Paschall, recalls many heart-to-heart talks with the man he viewed as a father. “The things that he saw in life, and that he learned, made him a wise man,” said Duncan. “He was accepting of most people and never, never judged.” Sam’s grandson Josh lived with him in his later years following the death of his wife, and his daughter Sheri was a constant in her father’s life after her mother died, visiting him daily. Often, she found him watching his beloved westerns on TV, his chair placed against a wall covered with family photographs. “I loved my dad. I cherished every moment with him.” Visitation hours are noon to 3 p.m. Saturday, Feb. 2 at Kalkaska Funeral Home, 152 S. Cedar Street. Donations to the charity of their choice.

Samuel Oluf Lewis enjoyed life&#8217;s simple pleasures, whether it was fishing on Island Lake, bowling with his wife, or joining her to entertain their many friends in the family&#8217;s basement bar, The Nail Hole. Samuel passed away on January... View Obituary & Service Information

The family of Samuel Oluf Lewis created this Life Tributes page to make it easy to share your memories.

Send flowers to the Lewis family.