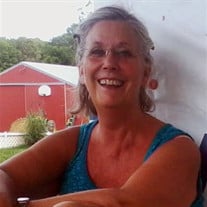 Sally Ann Shetler, 66, of Kalkaska, passed away unexpectedly May 8, 2018. Born on March 1, 1952 in Port Huron to Irene Zook and her late father John Zook. She was raised by her single mom in the 1950’s, where they lived in Fairview, MI for a couple years, then in Sturgis, MI for nine years, before moving back to Fairview when she was 13 to finish her school years making close friends for life. After graduating high school, she moved to Minneapolis for a short period of time, then to Traverse City with her best friend Charliss in 1972 where they worked at the Essex factory before becoming CENA’s at Solen Nursing Home. Sally met George Shetler during this time at a church communion at the Coldsprings Mennonite Church. George and Sally married the next year on March 31, 1973 and were soul mates for the next 46 years. They lived in Ohio for their first year of marriage then moved to Kalkaska where they eventually bought the farm on Tyler Road in 1979. She worked alongside George, raising their 5 children and helping him run the farm, first as a simple dairy then creating the bottling business into what it is today. Sally enjoyed painting, spending time with her Ya Ya Sisters and Eve’s Club, giving her time and energy to anyone that needed her help, sitting in the sun and enjoying her beautiful flower beds, praying to and trusting in her Lord Jesus, finding as much time as possible to attend events and functions of her many grandchildren, and of course planning and going on vacations with her true love George. Sally is survived by her husband George; two daughters: Stacia (Jason) Davis and Annie (Justin) Olds; three sons: G. Kaleb (Traci) Shetler, J. Jacob (Priscilla) Shetler, and Peter (Darcy) Shetler; 20 grandchildren: G. Gregory (Rachel) Shetler, Ivy Hart, Tyrone Shetler, Elizabeth Shetler, Gabriel Shetler, Bodee Hart, Mariah Shetler, Alexis Shetler, Jadon Shetler, Jenna (Jacob) Verstraete, Kadence Davis, JaeAnn Davis, Luke Olds, Evelyn Olds, Sidney Shetler, Andrew Shetler, Jackson Shetler and Owen Shetler; and three great grandchildren: G. Frederico Shetler, Ronald Shetler, and Greyson Verstraete. Sally is preceded in death by her father John Zook, mother Irene (Gerber) Zook, and grandson Jonathon Shetler. Visitation will be from 5-8 pm on Friday, May 11, 2018 at Kalkaska Funeral Home. The funeral service will be held at 11:00 am, with final visitation beginning at 10 am, at the Kalkaska Church of Christ. Burial will follow at Excelsior Township Cemetery. In lieu of flowers, the family is asking for charitable donations to be made to KAIR of Kalkaska and the WLJN radio station. Arrangements by Kalkaska Funeral Home.

The family of Sally Ann Shetler created this Life Tributes page to make it easy to share your memories.

Send flowers to the Shetler family.