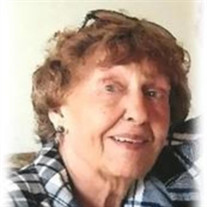 Sally Ann King, 84, of Traverse City, passed away on September 7, 2020. She was born on April 20, 1936 to the late John and Eleanor (Arbiter) Rives in Royal Oak. Sally was a Born Again Christian and raised her family to become believers also. She loved children and worked at an elementary school for many years. Becoming an empty nester wasn’t appealing so she moved to Eaton Rapids, became a mom for several young ladies at the VFW National Home. She truly loved those girls and they’ve stayed in touch with each other until her death. After the girls graduated from high school Sally came back north to manage a bed and breakfast in Glen Arbor. Her next venture was spending several years managing a women’s clothing and accessories boutique at the Grand Traverse Resort. When she thought it was time to retire...she found herself bored so Sally volunteered with Catholic Human Services as a volunteer grandma at local elementary schools. Kids were always special to her, she volunteered as a grandma until she was 80 years old. While accomplishing all of these things, she managed to travel and attend as many sporting events, birthday parties, graduations, and family gatherings as she could. Sally’s children, grandchildren and great grandchildren were absolutely the most loved accomplishments of her life, and they loved her. Sally is survived by her daughters: Diane (Rick) Swoverland and Cathy (Mike) Beltz, grandchildren: Sterling (Matt) Avery, Arica (Dave)Zenner, Aaron (Deb) Swoverland, Alex Swoverland, great grandchildren: Chandler Holley and Trinity Avery, Ava, Mya and Ema Zenner, Grace and Annie Swoverland, and brother Jerry (Sharon) Rives and several nieces and nephews. She is preceded in death by her parents, husbands: Derry McColley, Clayton King, and brother Jack Rives. A Celebration of Life for Sally will be held at Diane and Rick’s home Saturday, September 12, 2020 at noon, and Sally would have expected everyone to be punctual. Arrangements have been entrusted to Kalkaska Funeral Home and Cremation Services.

Sally Ann King, 84, of Traverse City, passed away on September 7, 2020. She was born on April 20, 1936 to the late John and Eleanor (Arbiter) Rives in Royal Oak. Sally was a Born Again Christian and raised her family to become believers also.... View Obituary & Service Information

The family of Sally Ann King created this Life Tributes page to make it easy to share your memories.

Sally Ann King, 84, of Traverse City, passed away on September...

Send flowers to the King family.