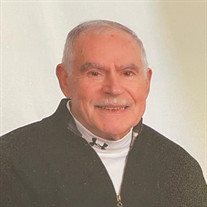 Not sure what to send?

Russell Vizina, 82 of Baraga, MI passed away peacefully with family by his side on June 4th, 2022. Russell was born February 26, 1940 in Baraga to the late Lawrence and Virginia (Cadeau) Vizina. Russell graduated from Baraga High School in 1958 and enlisted in the Army in 1959. Honorably discharged in 1961, he was later recalled to the Berlin Crisis serving until 1962. Using the GI Bill, Russell attended Ferris State College, met his wife, and graduated with a BS in Environmental Health in 1969. He later earned an MS in Environmental Health Science from the University of Alaska – Fairbanks in 1973. He began his career as a Sanitarian for the State of Michigan. Later he served as a commissioned officer in the United States Public Health Service (USPHS) from 1972, retiring in 1996 with the rank as a captain. During his time with the USPHS, he worked within the Indian Health Service (IHS) in Tishomingo, OK; Mobridge, SD; and Sault Ste. Marie, MI. For the majority of his career, Russell served as the Director of the Sault Ste. Marie Tribal Health Clinic, receiving recognition for leadership and advocacy from the Sault Tribe and the Grand Traverse Band of Ottawa and Chippewa Indians. His colleagues remember him for strong leadership and tenacity towards improving tribal health. With his kind heart and willingness to help others, Russell was a fervent believer in holistic health. One of Russell’s biggest achievements was being inducted into the Sault Tribe of Chippewa Indians as a lifetime honorary member in 1996, being named Niigaanii Maa’iingan meaning “the leader wolf” or “leading the wolf”. He respected the rarity of this honorary membership and remained close to tribal members throughout retirement. In addition to spending time with family, Russ enjoyed running, hiking, fishing, hunting and camping. Family and friends recall his excitement of annual camping trips to “The Bush,” an isolated island north of Wawa Canada with nature on full display. He thoroughly loved being outdoors while sharing laughs with friends and family. The biggest love of his life was his grandchildren. He was lovingly referred to as “The Baby Hog” as he loved holding and cuddling his grandchildren. Russell is survived by his wife of 54 years Kathleen of Roscommon, MI and daughters Heidi (Andrew) Jarmuz of Minneapolis, MN and Janet (Lewis) Vizina-Roubal of Traverse City, MI; his grandchildren Lewis Roubal, III, Ainsley Roubal, Felicity Jarmuz, and Faith Jarmuz; his brother Raymond (Ethel) Vizina; his sisters Mary Lou (Arvin) Prebelski; Helen Clisch; his sisters-in-law Karen and Delores. He was preceded in death by his parents; his brothers Leonard and Donald; and brother-in-law Paul Clisch. Visitation will be held from 5:00-7:00pm on Wednesday, June 29th at Jacobson Funeral Home in L’Anse, MI. His funeral mass will be held at 1:00pm on Thursday, June 30th with the family greeting friends at 12:00pm at St. Ann’s Catholic Church in Baraga, MI. A graveside service will be at 2:00pm with a luncheon following at the church hall. In lieu of flowers the family is asking for donations to the Baraga County Community Foundation or the Ferris State University Vizina-Roubal Endowed Family Scholarship. https://igfn.us/form/DPkuUg TTG: Text FSUMSW to 41444

Russell Vizina, 82 of Baraga, MI passed away peacefully with family by his side on June 4th, 2022. Russell was born February 26, 1940 in Baraga to the late Lawrence and Virginia (Cadeau) Vizina. Russell graduated from Baraga High School in... View Obituary & Service Information

The family of Russell J. Vizina created this Life Tributes page to make it easy to share your memories.

Russell Vizina, 82 of Baraga, MI passed away peacefully with...