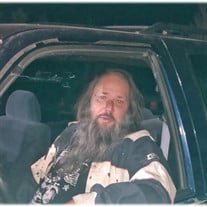 Ronald Lloyd Ransom, 56 of South Boardman, passed away unexpectedly at his home on March 2, 2020. He was born on September 19, 1963 to H. Lloyd Ransom and Lucena Muehling (Kendall). Ron enjoyed camping, floating the river, playing billiards and cards, riding around on his motorcycle and 1970 GTO, but most of all he enjoyed spending time with friends and family. He will always be remembered for his ability to make everyone laugh and chewing on his finger. He leaves behind two daughters Kandice (Dustin) Carr and Stephanie Ransom, girlfriend Carrie Boon, 3 grandchildren, brother Ken Ransom, step brothers Dan, Walt, and Jerry Muehling and step sister Debra Kurtzal, his parents, and many “adopted” children and friends. Ron was preceded in death by his sister Cindy Ransom, step father Walt Muehling, and his grandparents. It was Ron’s wishes to not have a funeral, but instead to have a celebration of life. He wanted everyone to remember him as the funny, happy, loving guy he was, not to be sad for his passing. A Celebration of Life will be held at a later date at the Hulwick Event Center, 10674 Coster Rd. SW, Fife Lake, MI 49633. Arrangements have been entrusted to Kalkaska Funeral Home and Cremation Services.

The family of Ronald L. Ransom created this Life Tributes page to make it easy to share your memories.

Send flowers to the Ransom family.