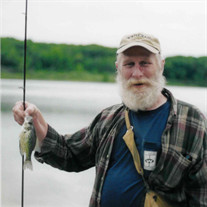 Ronald James Hannert, 68, of Kalkaska, Michigan passed away on September 30, 2018 at his home. He was born April 24, 1950 in Detroit, Michigan to the late Jack (1969) and Pearl (Butler) Hannert (1992). Ron grew up in Berkley, Michigan where he married Holly (Vann) in 1975. Sadly, Holly passed in 1997. Ron is survived by his son Jack, daughter-in-law Joelle, and grandson Alwin of Traverse City, his son Glen, daughter-in-law Stacy, and grandson Rhine of Kingsley, and his sister Susan Link of New Jersey. Ron worked at Contractors Pipe & Supply Corp. before retiring in 2012. He realized his dream of living on a lake where he could fish, fish, fish, and be close to his family when he moved to Lake Manistee in Kalkaska. Ron loved animals, nature, and the great outdoors. He was never without a dog or a cat, and numerous chipmunks, squirrels, birds, and butterflies who visited daily for food and companionship. Ron was a good friend to all he let in his life, a loving husband, a great role model-father, an adoring grandfather, and a very special brother. He will be missed. In lieu of flowers, please consider a donation in Ron’s name to your local animal shelter.

The family of Ronald James Hannert created this Life Tributes page to make it easy to share your memories.

Ronald James Hannert, 68, of Kalkaska, Michigan passed away on...

Send flowers to the Hannert family.