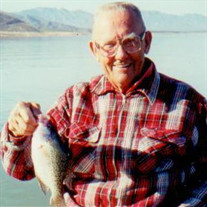 Robert Charles Norman (93) died peacefully at home at Kalkaska Memorial Assisted Living surrounded by his family Friday, June 24. Mr. Norman was a talented athlete and avid fisherman. He played tennis into his late eighties. His favorite place to be was in a boat on a Michigan or Arizona lake fishing with his beloved second wife, Jo. Mr. Norman was born in Livonia the last of four children of James and Frederika Norman and grew up in Plymouth. He attended Michigan State University on a tennis scholarship, where he also played football. He served in the Army during World War II. Mr. Norman married Joyce Hartman of Durham, North Carolina in 1944. Together they reared six children in Plymouth and later Elk Rapids. He retired as Fire Chief from the Wayne County Child Development Center in 1976. HIs family and many friends best remember him for his active participation in community sports and life-long devotion to fishing. His record Muskie catch was featured on Morton Neff's television show in the late 1950s. Mr. Norman was fortunate to have had two long, happy, and eventful marriages and a large extended family. He was preceded in death by his first wife of 42 years and mother of his children, Joyce (Hartman) as well as by one sister and two brothers. Mr. Norman is survived by his second wife of 30 years, Jacqueline Joyce (Kettner) of Kalkaska; six children: James of Commerce Township, Donald (Mary) of Charlevoix, John (Lynne) of Traverse City, Edward (Maureen) of Kalkaska, Char (Richard) Knowlton of Elk Rapids, and Charles (Kitty) of Honor; four step-children: Kathi (Edwin) Polk and Kevin (Teresa) Beck of Traverse City, Kenneth (Susan) Beck of Shell Knob, Missouri; and Randall (Jackie) Beck of Rochester Hills. He was the beloved Grandfather of 16 and Great-Grandfather of 31. A gathering to honor Mr. Norman will take place on Monday, June 27, 2016 at Kalkaska Memorial Assisted Living at 2:00 pm. Arrangements are entrusted to Kalkaska Funeral Home.

The family of Robert Charles Norman created this Life Tributes page to make it easy to share your memories.

Send flowers to the Norman family.