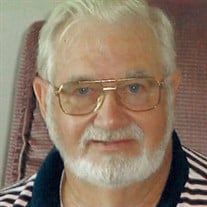 Robert “Bob” Lewis McCullick, 80, of Kalkaska, passed away on Wednesday May 4, 2016. Bob was born to the late Clyde and Fransis (McCurdy) McCullick on October 28, 1935 in Williamstown, West Virginia. He married Donna J. Miller on December 13, 1959 after serving in the United States Army during the Korean War. Bob was a retired shop foreman for the oil field, served as a fire fighter and was also a member of the New Life Assembly of God. His hobbies included camping, hunting, fishing, and tinkering on cars. Bob was an all around handy man and enjoyed working with his hands. Bob is survived by his children Bryan (Valerie) McCullick , Lisa (Joseph) Webb, Angela Williams, and Whitney (Andrew) Hanna, 8 grandchildren, Kendra McCullick, Joey Leach, Cameron Webb, Laurel Webb, Sadie Vanvliet, Keneniah Williams, Miranda Webb and Jocelyn Hanna, sister Patty Hedrick and brother David McCullick. Bob was preceded in death by his parents, brother Don and his loving wife and best friend Donna. A Memorial Service will take place at 11:00 am, on Monday May 9, 2016, in the chapel of the Kalkaska Funeral Home. Memorial Contributions may be made in Bob’s honor to New Life Assembly of God. Arrangements entrusted to Kalkaska Funeral Home and Cremation Services.

The family of Robert Lewis McCullick created this Life Tributes page to make it easy to share your memories.

Robert “Bob” Lewis McCullick, 80, of Kalkaska, passed away on...

Send flowers to the McCullick family.