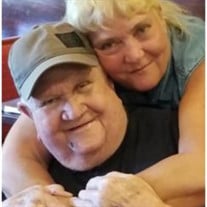 Robert “Bob” Hasty was born in Lockland, Ohio on April 1, 1930; the youngest of 4 children to Robert Lee and Sophie Jeanette. (Bradley) Hasty. Bob married Ann Williams On August 26, 1950 in Sharonville, Ohio. Bob and Ann met in 1944 when he and a friend took their dates to Coney Island in Cincinnati, Ohio. After a fun filled day Bob left with his friend’s date. He said that he knew that day he would love her for the rest of his life. And their adventure began. On December 21, 1952 there first child, Robert Steven was born, followed by Jodi on June 9, 1955, and then Susan on November 1, 1959. Bob and Ann were married for 62 years. In 1961 Bob started a long and distinguished career as an Over-the-road Truck Driver with Wenham Transportation. There isn’t a road in the Midwest that Bob hadn’t traveled at least once in his lifetime. He could tell you when he was there, the best place to eat, and who had the best coffee in the area. You could call him night or day and give him and intersection and he could get you out of a traffic jam or to the best restaurant; which would eventually become a family vacation game for his children and grandchildren. During his time with Wenham he was regularly recognized for his safety on the road. In 1968 he received a commendation for saving the life of Moon Edward’s, a driver from a competing company. Bob always thought that people made a big deal out of just doing what was right, but that was Bob and his legacy. On May 5, 1975 Bob began working for Northwestern Leasing in Kalida, Ohio. The owners of the company (Herk and Wimp a.k.a. Uncle Charlie) became an extended family to Bob. Along the way he met his best friends, Kenny Stocker, Dick Karcher, and John Selhorst. After Bob retired, the first time, he still considered Kalida as a home away from home and made frequent visits just to have a cup of coffee or a good meal. Bob retired, again, in 1995 for 6 months before he realized that he wasn’t cut out for the retired life. For the next 22 years he worked for E & J Trucking in Cincinnati, Ohio where he continued to rack up the miles. Bob is a member of the Million Mile Club. When you’d ask him how many miles he drove he would tell you “I quit counting before they started keeping track”, “I’ve driven more miles asleep than you ever will awake” or his families favorite “I’ve driven more miles backwards down a one-way alley at night than you’ll drive forward”. His family estimates that he may have driven more than a Billion miles in his career. Bob adored his family and cherished his time with them more than anything else. From crazy day trips to having Ann and his children follow him on a run for a vacation adventure, Bob loved to share his life on the road with all of them. He even made some special trips with his grandkids riding “shot gun” so they could see the roads he loved. Bob was preceded in Death by his Son Robert Steven Hasty, Wife Ann, Great Grandsons Connor and Paxton Lucas, and Daughter Jodi Carr. Bob is survived by his daughter Susan (Jerry}Hollopeter, daughter-in-law Patsy, 5 grandchildren, 8 great grandchildren, numerous nieces and nephews, and many others who loved him. Burial will take place in the Spring of 2022 with a graveside service at Brookside Cemetery in West Chester, Ohio.

The family of Robert "Bob" Hasty created this Life Tributes page to make it easy to share your memories.

Send flowers to the Hasty family.