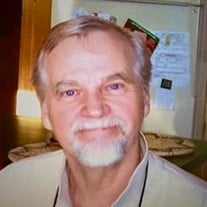 On November 5th, 2021, Robert LeRoy DeVee died peacefully at home, surrounded by family, in Mancelona, MI. He was 83 years old. Robert is survived by his wife Judi, who were married 59 wonderful years, son Todd (wife Carrie) of Burnsville, NC., son Scott of Melbourne, FL., and son Jody of Southfield, MI. Robert is also survived by his brother John (wife Wendy) of Ann Arbor, MI., sister Sharlene of Opelousas, LA. and 4 grandchildren: Carley, Jacob (wife Kelsey), Sebastian, and Quentin. He was preceded in death by his father Ross and mother Mary, brother Kenneth, sister Dorothy, brother Charles, sister Agnes, sister Helen, sister Neita, and sister Barbara. Robert was born on January 23, 1938 in Monroe, MI. He graduated from Milan High School in 1956 and went on to attend Wayne State University where he graduated in 1968 with a master’s degree in Rehab Counseling. Robert also served in the USAF. Robert married Judi in 1962. Robert and Judi met while serving in the USAF at Eglin Air Force Base in Florida. They welcomed Todd in 1963 and Scott in 1964, and Jody in 1968. Robert was an active member of the Cornerstone Community Bible Church where he accompanied keyboards with his guitar. He loved playing golf, spending time with kids and grandchildren, camping, playing board games, reading, volunteering at Kair in Kalkaska, and enjoying all of this with a bowl of ice cream. A memorial service for Robert is scheduled for 2 pm on Sunday, November 14th at Cornerstone Community Bible Church located at 6821 County Rd 612 NE, Kalkaska, MI 49646. It will be immediately followed by a luncheon at the same location. In lieu of flowers, the family asks to consider donating to Cornerstone Community Bible Church in Robert’s memory. Please join the family to celebrate Robert’s wonderful life. Arrangements have been entrusted to Kalkaska Funeral Home and Cremation Services.

The family of Robert LeRoy DeVee created this Life Tributes page to make it easy to share your memories.

Send flowers to the DeVee family.