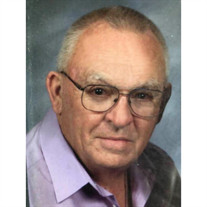 On June 22nd, 2021 Raymond Gene Bourne peacefully went to be with the Lord. He was born to Archie and Viola Bourne on May 7th, 1937 in Manton, Michigan. He attended school until the 11th grade and then entered the United States Air Force in 1955 as a jet engine mechanic. He then worked for Oscar Mayer in Madison, Wisconsin. On December 7th, 1968, he married Shirley Ann Retrum and they moved to Kalamazoo, Michigan. Ray retired from General Motors after 25 years of service and became a snowbird traveling between Florida, Wisconsin and Michigan. Ray loved music, he recorded hymns and old country and western songs on CD's so that everyone could enjoy them. He also participated in a singing quartet that performed for his church in Florida. Playing cards, Yahtzee and putting together puzzles were some of his favorite past times. He volunteered for the Michigan Blood Bank and could be seen at the Senior Center in South Boardman on Tuesdays and Thursdays. He was also crowned Senior King for the 2019 Trout Festival in Kalkaska. Ray loved spending time with his family even though when they said they were coming to visit him he was "Heading down to the Keys!" When the kids came to visit they would always be asked, "Have ya had a spanking yet today?" Ray was a member of Calvary Baptist Church in Kalkaska, Michigan. Ray is survived by his wife of 52 years Shirley, six children, Jeffrey Retrum, Brenda (Gordon) Weggen, Rene (Bryon) Dopkins, Tamra (Todd) Brueggeman, Steven (Donna) Bourne, and Archie Bourne. 13 Grandchildren: Amelia, Caryssa, and Felicia Retrum, Emily (Richard) Johnson, Eric Serocki, Kyle (Ashley) Dopkins, Jason Dopkins, Sarah (Maurice) Rimmer, Kimberlee Thomas, Hilleree LaBelle, Brittany and Marissa Bourne and Lauren Kindig and 25 Great-Grandchildren. He is further survived by his siblings Edith (Carl) Ingersoll, Edna Mae Wahl, Elaine (Harold) Scribner, DeVere (Darlene) Bourne, and Wayne Bourne, many other family members and friends. He was preceded in death by his parents, former wife Beverly Stricker and a great grandson James Johnson. Ray never met a stranger and will be dearly missed by those who knew him. There will be a memorial service with full military honors at Clark Cemetery, also known as Springfield Township Cemetery, Fife Lake, Michigan at 11 am with a meal to follow at the Springfield Township Park on 21 August 2021. Ray's family would like to thank the Cowell Family Cancer Center for their loving care. In lieu of flowers the family asks that donations be made to St. Jude Children’s Research Hospital. Arrangements have been entrusted to Kalkaska Funeral Home and Cremation Services.

On June 22nd, 2021 Raymond Gene Bourne peacefully went to be with the Lord. He was born to Archie and Viola Bourne on May 7th, 1937 in Manton, Michigan. He attended school until the 11th grade and then entered the United States Air Force in... View Obituary & Service Information

The family of Raymond G. Bourne created this Life Tributes page to make it easy to share your memories.

Send flowers to the Bourne family.