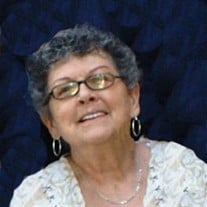 Phyllis Maxine (Puffer) Cervone of Kalkaska, passed on Thursday, June 13, 2019, about a month shy of her 87th birthday. She outlived all of her siblings, the children of Lloyd and Ruth (Ehl) Puffer of Spencer Village. She is survived by four loving children and their four spouses, nine grandchildren and nine great-grandchildren. A woman who thought conformity was blasphemous, Mom was never shy of ensuring you knew where she stood. She educated beyond that of her siblings and had a career in nursing long before it was acceptable for women to have a career. She left the rural life of her birth for much more urban surroundings, only to return “home” later in life. Married to the love of her life (Louis) in 1953, the two thrived in their commitment to one another, making each other better people along the way. She raised her four children to be confident in their opinions, yet respectful of others. Mom began her recovery journey over 35 years ago, sponsored dozens of people and was committed to her sobriety for the remainder of her life. She was diagnosed with inoperable lung cancer at age 79. After winning that battle, the door opened to breast cancer. Another battle won. A little over a week ago, she was told the cancer was back in her lungs. While she had moments of fear regarding her impending death, she was done fighting. In true Phyllis form, she mustered up the strength and courage to embrace it. After one last deep breath, Mom left us to join her husband, leaving us with one final lesson: living the serenity prayer actually works. Visitation will take place Wednesday, June 19, 2019 from 5-7 pm at Kalkaska Funeral Home. The funeral service will be Thursday, June 20, 2019 at 11 am with a final visitation beginning at 10 am until the time of service, in the chapel of Kalkaska Funeral Home. In lieu of flowers, the family would like you to consider a donation to the Kalkaska Friends of the Library New Building Fund. https://www.kalkaskalibrary.org/donate-2/

Phyllis Maxine (Puffer) Cervone of Kalkaska, passed on Thursday, June 13, 2019, about a month shy of her 87th birthday. She outlived all of her siblings, the children of Lloyd and Ruth (Ehl) Puffer of Spencer Village. She is survived by four... View Obituary & Service Information

The family of Phyllis Maxine (Puffer) Cervone created this Life Tributes page to make it easy to share your memories.

Send flowers to the Cervone family.