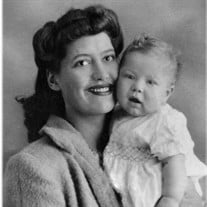 Peggy ‘Ladyday’ Gerring, 97, of South Boardman passed away January 24, 2020 at her home. Peggy was born in Kingston-Upon-Thames, England, on March 10, 1922 to the late William and Elizabeth (Hursey) Sylvester. At an early age Peggy learned how to knit, which would occupy many happy hours later in her life. She left school at the age of 14 to begin work in various occupations, including a spark plug factory, hospital laundry, pickle factory, and during World War II, at a munitions factory. Peggy met her future husband, Wendell Gerring in 1942 and they were married on December 4, 1943 at St. Peters Church in Kingston. In April of 1946, Peggy began her journey to the United States, with her 16 month old son Terry, crossing the Atlantic on the Queen Mary. Peggy and Wendell moved into their home on East Main Street which Wendell finished building in September of 1947, where she resided until her passing. As an early member of the South Boardman American Legion Auxiliary, Peggy helped with the numerous Thursday dinners, funeral luncheons, as well as filling the office of Chaplain. Peggy also served as a room mother at the South Boardman School. Peggy loved baking and sharing her baked goods, especially coconut cakes and no-bake cookies. She enjoyed bowling and rolling the dice at Bunco parties. Her passions included, a love of children, knitting, singing and letter writing. Her delight in singing began at an early age when she would sing to the boarders at her Grandmothers’ boarding house in England. Throughout her life, singing brought much joy to herself, family and friends. Until the day before her passing Peggy was still singing her favorite songs, including a heartfelt rendition of “I Love you a Bushel and a Peck.” Holidays were important to Peggy, especially Christmas. She often recollected her childhood Christmases in England where the present of a penny and an orange was common. Gift giving and providing for her family gave her great satisfaction. Each year she upheld her father’s tradition of making the Christmas pudding. Peggy got into the spirit of Halloween, dressing up in costume and providing lots of candy. She certainly loved her sweets, particularly ice cream. In her later years Peggy spent many hours knitting hats and scarves and never missed an episode of Wheel of Fortune and Lawrence Welk. Peggy is survived by six sons, Terry, Allan (Evelyn), Brian (Brenda), Roy, Ross, Scot (Kim), all of South Boardman and two daughters, Maureen (Gordon) Sparks of Cadillac, and Loretta (Paul) Schaefer of South Boardman. She is also survived by numerous grandchildren, great grandchildren, nieces and nephews. She was preceded in death by her husband Wendell in 1997, her brother George in 1940 and her granddaughter Jessica in 1993. The family would like to thank her grandson Todd for his kind attention during her final illness. Funeral services will be held at the South Boardman Methodist Church on Saturday, February 1, at 11:00, Minister Fred Jacko officiating, with visitation from 9:30-11:00. A luncheon will follow at the South Boardman Senior Center.

The family of Peggy Gerring created this Life Tributes page to make it easy to share your memories.

Send flowers to the Gerring family.