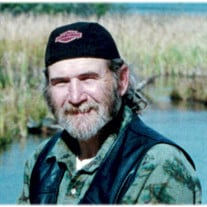 Paul Joseph Slick “Papa” peacefully passed away at his home surrounded by his loving family on September 20, 2019. He was born on January 3, 1951 to Clair and Mary (Brooks) Slick in Ypsilanti, MI. Paul will be lovingly remembered by his wife of 41 years Mary (Ritter), daughters Melissa Slick of Traverse City, Jolene (Jay) Terrell of St. John’s FL., Kristy (Jereme) Swoboda of Arvada CO., precious grandchildren: Isaac, Addyson, Preston, Aiden, Madelyn, Benton, Brielle, Mirra and future granddaughter Kreeana, siblings: George Slick, Cindy (Dan) Halligan all of Kalkaska and many nieces, nephews, great nieces and great nephews. Paul was preceded in death by his parents, siblings: Kenneth Slick, Chris Slick, Mary DeEtt and infant grandson Honor. Paul served in the United States Army from 1968-1971 with two tours in Vietnam. He was very proud to have served his country and was a strong advocate for Veteran’s Benefits. He was an amazing builder using his skills as a contractor for over 30 years. He loved his family and his grandchildren are his legacy. Paul enjoyed storytelling in epic proportions to all of them, making shadow images and drawing animals with them. He had nicknames for all his children and grandchildren and he was a child at heart. Paul was an avid hunter and fisherman and his love of the out of doors brought him so much joy throughout his life. He had many friends with whom he loved spending time with. He continued to teach his children and grandchildren right up to the end. Live by the Ten Commandments and also by the Boy Scout Laws. In Lieu of flowers Paul would like you to thank a Veteran and Support the St Jude’s Children’s Hospital. A Graveside service will be held for Paul on October 12, 2019 at 11:00 AM at the Clearwater Township Cemetery, 6833 Gillett Road N.W. Rapid City. A Luncheon will follow at the Kalkaska Moose Lodge, 2210 M-66. Come join the family in celebrating Paul’s life. Arrangements have been entrusted to the Kalkaska Funeral Home and Cremation Services.

Paul Joseph Slick &#8220;Papa&#8221; peacefully passed away at his home surrounded by his loving family on September 20, 2019. He was born on January 3, 1951 to Clair and Mary (Brooks) Slick in Ypsilanti, MI. Paul will be lovingly remembered... View Obituary & Service Information

The family of Paul J. Slick created this Life Tributes page to make it easy to share your memories.

Send flowers to the Slick family.