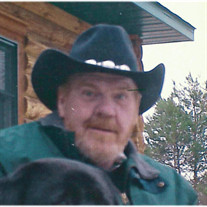 Mose “Harold” Dunford, 74, of Kalkaska, passed away Saturday, February 6, 2021. Harold was born in Bartley Hollow, West Virginia to the late Jessie and Hattie (Davidson) Dunford on January 24, 1947. Harold was a retired veteran. He also retired from E & L Transport. He was a very giving person who would help anyone in need. His friends and family feel very blessed to have known him. Harold cherished his lawn and it showed as it was always beautiful. One of his favorite things to chant while he worked was, "Mose mows as Johnathan grows.” He enjoyed keeping his vehicles running for many years, making true friendships with Jeff Gelinas, and Leah Lantzer at Bill Marsh Auto Group in Kalkaska. He enjoyed being with his Michigan families, BBQ, porch sitting, holiday dinners, long drives, West Virginia Mountaineers, watching TV, and of course a good cup of coffee. Johnathan Bishop was Harold’s best buddy that he watched grow into a young man. Harold was very proud of him and his wife Courtney and of course his Great Ava Bishop. He was known as the Great Harold because he preferred that over the name grandpa. He was also so proud of John and Anna Weatherholt and their son Jack. Harold will be lovingly remembered by family and close friends among them are: his brother Jessie Fred Dunford and his wife; Jason and Christine Bishop, Johnathan, Courtney and Ava Bishop, John, Anna and Jack Weatherhold, Jeff Gelinas, Leah Lantzer, Bob Harlow, Kathi Krater, Cassie Shupe, Rick and Pam Thompson, Steve Degroff, Buster Rapoza, Bill and Joyce Bacalis, Loretta Dial, Tim Eschedor, Larry and Carol Wise and Don Breeding. He was preceded in death by his parents and sister Vernie Haggerman and his dog Lady. In lieu of flowers, donations can be made to a college fund for Ava and Jack. Arrangements have been entrusted to Kalkaska Funeral and Cremation Services.

The family of Mose "Harold" Dunford created this Life Tributes page to make it easy to share your memories.

Send flowers to the Dunford family.