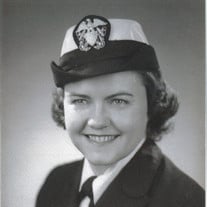 Miriam J. Calnan 8/28/1930 – 10/30/2020 Miriam was born in Boston, MA the youngest of four children. She and her twin sister Marian were born just 15 minutes apart. Miriam and her sister trained at Boston City Hospital in the Sisters of Mercy Nursing program. Miriam served 21 years in the Navy. During her career she reached the rank of Lieutenant Commander. She was transferred every 2 years. She was stationed in Japan during the Vietnam conflict. She was stationed at Quantico during the “Bay of Pigs” invasion in Cuba. She served in both Italy and the United States. After her service with the Navy, she continued working as a nurse with her brother Dr. Arthur Calnan. She was able to travel while in the Navy and into her retirement seeing much of the world; Greece, China, Australia, New Zeeland, Ireland and England, just to name a few. She is very proud of her Irish and Scottish heritage. She was preceded in death by her parents, Augustine F. and Mary E. Calnan, her brother Dr. Arthur Calnan and his wife Jeanne Calnan, her sister Marian Pryor, her cousin James Eagan and nieces Barbara Forsell and Carolyn Smith. She is survived by her brother Donald and Margaret Calnan. She is survived by her nieces and nephews whom she loved as much as they loved her. Eileen and Don Pierson, Kathleen Calnan, Diane Robinson and Steve, Sandra and Bill Dillon, Maryellen and Bruce Hulwick, Jeffrey and Jo Calnan, Lavon and Mark Silhavy, Douglas and Carolyn Calnan, Brenda and Joe Farkas, Roberta Davis, John and Nancy Pryor, David and Aylene Calnan and Rob Pryor and Steve Zurbucher . There are many great nieces and nephews and many great-great nieces and nephews who knew and loved her as well. Miriam’s beautiful smile and laugh will be missed by all of her friends and family. Thanks to Cherry Hill Haven in Traverse City, Michigan who helped the family care for her. Thank you to Kalkaska Funeral home in their assistance in returning her home and Keohane Funeral and Cremation Service in Quincy, Massachusetts. Private services will be held by the family.

Miriam J. Calnan 8/28/1930 &#8211; 10/30/2020 Miriam was born in Boston, MA the youngest of four children. She and her twin sister Marian were born just 15 minutes apart. Miriam and her sister trained at Boston City Hospital in the Sisters... View Obituary & Service Information

The family of Miriam J. Calnan created this Life Tributes page to make it easy to share your memories.

Send flowers to the Calnan family.