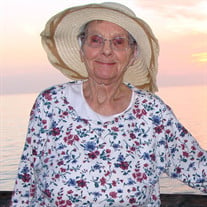 The beloved Marion Rose Moody, 90, of Rapid City, passed away on September 18, 2017, at Grand Traverse Pavilions. She was a very special mother - a wonderful and loving person with a heart of pure gold. She will be missed by all. Marion was born on November 20, 1926, in Chestonia, near East Jordon, to the late Samuel and Bertha (Lavanway) Sutton. Marion moved to Rapid City in 1927 and attended Rapid City School for 11 years, where she starred as a basketball player. She graduated from Traverse City High School in 1944. She attended North Central Bible Institute in Minneapolis, Minnesota in 1950. She took up teaching Vacation Bible School. She married Theodore H. Moody in Cheyenne, Wyoming, while he was in the Air Force, and together, they raised nine children. She was a charter member of the By Way Gospel Tabernacle, now known as the Torch Lake Assembly of God Church, and she was also a charter member of the Traverse City Assembly of God Church, now known as New Life Assembly, of which the first service was held in a tent. Marion loved to play the accordion and was a beautiful piano player. She also enjoyed making quilts for her children and grandchildren. She loved canning, especially tomatoes. Marion is survived by her husband, Theodore Moody of Rapid City; and Sons: Robert (Robin) Moody of Fort Pierce, Florida; Dennis Moody of Port Saint Lucie, Florida; David (Kathleen) Moody of Alanson, Michigan; Steven (Lynn) Moody of Elk Rapids, Michigan, and Daniel Moody of Grandville, Michigan. Daughters: Shirley (David) Sutton of Thornton, Colorado; Darlene (David) Weber of Interlochen, Michigan and Pamela (Casey) Jones of Wausau, Wisconsin. She is also survived by a Sister, Marie Lawson of Caro, Michigan and fourteen grandchildren and ten great-grandchildren. Preceding her in death was her beloved daughter, Charlene "Char" A. (Moody) LeBlanc of Grand Rapids Michigan; sisters, Dorothy, Luella, Myrtle Yoder and Clara Barnes; and brothers, Stanley (died at age four) and Harry. Visitation will be from 2-4 pm & 6-8 pm on Thursday, September 21, 2017, at Kalkaska Funeral Home. The funeral service will be held at 1:00 pm, with final visitation beginning at 12:00 pm on Friday, September 22, 2017, at Kalkaska Funeral Home, with Rev. Christine Johnson of Torch Lake Assembly officiating. Burial will follow at Maple Grove Cemetery in Elk Rapids. Arrangements have been entrusted to Kalkaska Funeral Home.

The beloved Marion Rose Moody, 90, of Rapid City, passed away on September 18, 2017, at Grand Traverse Pavilions. She was a very special mother - a wonderful and loving person with a heart of pure gold. She will be missed by all. Marion was... View Obituary & Service Information

The family of Marion Rose Moody created this Life Tributes page to make it easy to share your memories.

The beloved Marion Rose Moody, 90, of Rapid City, passed away...

Send flowers to the Moody family.