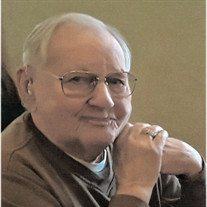 Manson Puckett Ballard, born in Hymera, Indiana January 29, 1924 to Harold and Ruth Belle (Mahan) Ballard, passed away in Kalkaska, Michigan September 26, 2019. He graduated from Arsenal Technical High School in Indianapolis, Indiana in June 1942. He enlisted in the Army July 1942. During his first 4 years, he was deployed to both the European Theater and the Philippines in the Atlantic. In Belgium, with the 2831th Engineer Petroleum Co. under the command of the 5th Army, they maintained a pumping station on a gasoline pipeline in support of various Air Forces. In the Philippines they built oil tanks for Shell Oil Co. He was discharged from active duty January 1946 but remained in the Reserves until March 1961. His unit was reactivated January 1951 to January 1954. He was appointed Warrant Officer in 1957. Manson (Yogi to some) married Alpha Madge (Shorty) Lambton in Indianapolis June 18, 1948, son Leslie Alan was born March 17, 1949. After working for A.V. Stackhouse Building Contractors in 1953, he went to work for Western Electric Company in Indianapolis, and retired in Shreveport, Louisiana in 1980. Yogi and Shorty retired to Leesburg, Florida and in 2005 they moved to Kalkaska, Michigan to be near Leslie and family. Manson was an avid bowler winning with his team over 30 ABC tournaments from 1968 – 2000. Other than bowling, he enjoyed going to the casinos with Madge, playing lotteries and sweepstakes, watching horse and auto racing and Ellen. He was preceded in death by his parents, sister June Francis (Homer) Johnson, brothers Harold Lloyd (Joan), James Manning (Christina) and Duard Dennis (Mary) Ballard. Madge his wife of 66 years preceded him in 2014. He is survived by son Leslie (Gladys) Ballard, granddaughters, Laurie Deann (Joe) Palamino, Kimberly Ballard and Jennyfer (Brandon) Neff, grandsons Donald (Alice), David (Kimberly) and Douglas (Jennell) Straughen. Great grandchildren Matthew and Jacob Neff, Lucas and Lilianna Palamino, William and Celetresse Ballard, Elizabeth, Aaron, Bret, Garrett and Jacob Straughen, Kalie (Seth) Poovey, Alissa (Darren) Rovito, Emily (Tyler) Carson, Seven great grandchildren and numerous nieces and nephews. He will be laid to rest in Evergreen Cemetery in Kalkaska next to his “beautiful” wife Alpha (Shorty) Ballard. Visitation will take place Tuesday, October 1, 2019 at 11:00 AM followed by a Graveside Service at 12:00 PM. Arrangements have been entrusted to Kalkaska Funeral Home.

The family of Manson "Yogi" Ballard created this Life Tributes page to make it easy to share your memories.

Send flowers to the Ballard family.