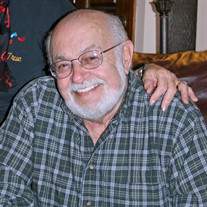 Louis Dominik Cervone...a marine...an auto executive...a grandfather...a father...and a husband. None of these defined him, yet collectively they begin to tell a story. Born Luciano Dominik Cervone on August 16, 1930 to first generation immigrants, "Louie," or "Lou" to his friends fought early to learn English in grade school and worked odd jobs to pay his way through private high school, including an “occasional pool hustle”, as he would remind us with a twinkle in his eye. When he joined the marines in 1947, he changed his name officially to "Louis". He served honorably in the Korean War as a demolitionist, rising to the rank of SSgt. While he rarely talked about his days in the Marines, he clearly demonstrated the finest attributes of Semper fidelis. He left the Marines and quickly fell in love with the love of his life, Phyllis Puffer, a stunning nurse from Kalamazoo. They soon became married in 1953. He and his love stayed together for more than 61 years...raising 4 children, LuAngela (60), Michele (58), Lynnette (55) and Tony (51). He raised his children with a thundering velvet hand, but a heart of gold...giving each of his children the space to grow, and the guidance to find each of their own individual paths. He is survived by each of their four spouses, nine grandchildren, and seven great grandchildren. Each of these adults, grand children and great grandchildren can tell stories of "how I was his favorite". He had that way about him. And that can be said by his professional colleagues, his friends and clearly, his beloved wife. May he be lifted up on eagles' wings. Visitation will take place on Wednesday, December 3, 2014 from 6PM – 8PM at Kalkaska Funeral Home, (152 S. Cedar St., Kalkaska). A Mass of Christian Burial will be held on Thursday, December 4, 2014 at St. Mary of the Woods Catholic Church, (438 County Road 612 NE, Kalkaska), beginning at 11AM with a final visitation at 10 AM. Father Norman Dickson, S.J. will officiate. Memorial contributions may be made to a charity of your choice. Burial will take place at Lodi Cemetery in the spring. Arrangements have been entrusted to Kalkaska Funeral Home and Cremation Services.

The family of Louis Dominik Cervone created this Life Tributes page to make it easy to share your memories.

Send flowers to the Cervone family.