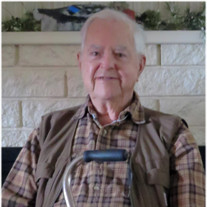 Lloyd Lewis Beebe, 93, of Kalkaska, passed away November 30, 2019. He was born in Kalkaska on November 18, 1926 to the late Ross and Esther (Lewis) Beebe. He married Beverly Nagy on February 23, 1950 and together they raised their six children in Kalkaska. After Beverly passed in 1997, Lloyd met and fell in love with Sally Hatley; they were married on July 3, 1998. Lloyd was a hardworking family man who was a great teacher and mentor to those whose lives he touched. He volunteered as a firefighter and served as fire chief in Kalkaska. He enjoyed playing euchre and cribbage with friends and family. His many hobbies included golfing, bowling, fishing, hunting and traveling. Lloyd provided for his family working as a surveyor for Kalkaska County Road and later retired as the Kalkaska County Road Superintendent. He also owned a Christmas tree farm and he was gifted at carpentry. Later in life, he lived at the Kalkaska Assisted Living and was recently privileged to be on the Honor Flight for his service in the Army during WWII. He is survived by his wife Sally, children: Sherry (Douglas) Johnson, Terri (Bruce) Veldman, Vicki Deffendall, Cynthia (James) Bartlett, Michael (Loretta) Beebe, and Kathryn (Michael) Bartlett, grandchildren: Kimberly (Shawn), Kevin (Ashley), Karl (Alivia), Janelle, Bill, S. Todd (Marcy), Rachel (Berny), Sean, Melissa, Becky, Amy (Thomas), Allison (Adam), Michelle (Jeff), and Ryan, along with 16 great-grandchildren, siblings: Elaine, (Elwin) Hager, Gerald (Sharon) Beebe and Janet (John) Beard and stepchildren: Mike Hatley, Bill (Karen) Hatley, and Patti (Dave) Bury. He was preceded in death by his parents, wife Beverly, and his brother Harold Beebe. Visitation will take place on Friday, December 6, 2019 from 6:00 -8:00 pm at Kalkaska Funeral Home. A funeral service will be held on Saturday, December 7, 2019 at 11:00 am at Kalkaska Church of Christ with a final visitation prior to the service from 10:00 – 11:00 am. Memorial Contributions may be made in memory of Lloyd to the Kalkaska Memorial Assisted Living or the Mid-Michigan Honor Flight. Arrangements have been entrusted to Kalkaska Funeral Home and Cremation Services.

Lloyd Lewis Beebe, 93, of Kalkaska, passed away November 30, 2019. He was born in Kalkaska on November 18, 1926 to the late Ross and Esther (Lewis) Beebe. He married Beverly Nagy on February 23, 1950 and together they raised their six children... View Obituary & Service Information

The family of Lloyd Lewis Beebe created this Life Tributes page to make it easy to share your memories.

Send flowers to the Beebe family.