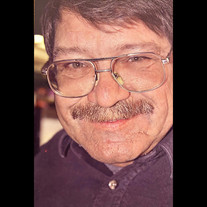 On Wednesday, December 4th, 2019, Lawrence (Larry) Frederick Francis, loving husband and father, passed away at the age of 65. Larry was born on March 10, 1954 in Petoskey MI to Theodore and Beatrice (Haney) Francis. Larry married the love of his life, Vickie Blake on July 13, 1993. They raised three sons, Todd, Trin, Scott and one daughter Sarah. He was deeply loved and will be greatly missed. Larry was an avid hunter who enjoyed nature. His love of nature led him out west where he lived in Wyoming, having a cabin in the mountains where he could relax and enjoy life with his loving wife Vickie. Larry was committed to his family, moving back to Michigan in his later years to be closer to the ones he loved. Larry served as the president of the Alba school board, taking great joy in being able to hand out diplomas to two of his children, Sarah and Scott. Larry was also dedicated to his community in other ways, such as serving as a volunteer firefighter for many years. Larry was also a loyal and devoted worker. He started his career in the oilfield at a young age. Through the years, Larry worked his way up through the different jobs, becoming a consultant in his last years of service. Larry was preceded in death by his parents Ted and Bea Francis of Elmira MI. He is survived by his wife Vickie, his brothers David (Beta) and Paul (Cindy), sister Ann (Ed), his children Todd (Noreen), Sarah (Don), Trin (Billie) and Scott (Suzanne). In addition, Larry will be missed by his grandchildren, David, Danny, Evan, Devon, Darren, Nick, Warren, Jerrica, Bryce, Reese, Shelby, Lydia, Stella, Scarlett and Sullivan and great grandchildren, Natilie, Lily and Evelyn. Larry’s funeral will be Friday, December 13, 2019 at the Kalkaska Funeral Home, 152 S. Cedar Street, Kalkaska MI. There will be a visitation from 10:30-12:00 followed by memorial service, 12:00-1:00. There will be a luncheon following the service at the Kalkaska United Methodist Church.

On Wednesday, December 4th, 2019, Lawrence (Larry) Frederick Francis, loving husband and father, passed away at the age of 65. Larry was born on March 10, 1954 in Petoskey MI to Theodore and Beatrice (Haney) Francis. Larry married the love... View Obituary & Service Information

The family of Lawrence Frederick Francis created this Life Tributes page to make it easy to share your memories.

Send flowers to the Francis family.