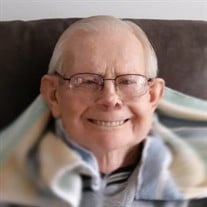 Lawrence Edward Cook (April 15th, 1935– April 18th, 2019) entered the Kingdom of Heaven after a battle of dementia and bone marrow cancer. He was able to celebrate his 84th birthday just 4 days before with loved ones, a day filled with laughter and tears, but one that will be forever in our hearts. Larry was born in Munising, Michigan to Benjamin and Ruby (Peterson) Cook. Larry would marry the love of his life Lynda Stuart on July 14th, 1956, and together they would weather the storms that life gives us on a daily basis. For 62 years they were able to show us what true and forever love looked like. Larry and Lynda would be blessed with three children, the late Pamela Jean Cook Weber, Mark Allen Cook of Tennessee and James Michel (Beckie) of Mancelona. His legacy lives on in several grandchildren, great-grandchildren and great-great-grandchildren. He is also survived by his sister, MaryAnn (Robert) Lenhardt of Milford, Michigan a brother in Law, Paul Stuart of Dearborn, Michigan as well as many nieces, nephews and cousins. Larry was reunited in the Kingdom of Heaven with his parents, Benjamin and Ruby, his siblings Ronald Cook, Charles (Nina Jean) Cook, Carol Ruth (Eugene) Blow and his daughter Pam. Their first home was in Detroit; Larry would build the home on Dunham Lake in Hartland, Michigan where many amazing memories were made. In 1999, they would move to Mancelona and build their retirement home on 140 acres. He was a brick layer starting at the age of 14; he would build many beautiful homes and apartments over the years. The amount of brick, stone and rock laid by his hands is countless. Larry and Lynda had the opportunity both before and during their retirement to travel around the United States visiting family and friends. They also traveled to England, Mexico and Canada. Many friends were made along the way and some friendships lasting well over 40 years. Larry liked to hunt, watch the Detroit Tigers, and eat lemon meringue pie. Services for Larry will be held on April 27th, 2019 at Saint Paul Lutheran Church, 2470 Beebe Road N.W., Kalkaska, Michigan with the Rev. Eric Black conducting the service. The family will receive family and friends from 10:00am – 11:30am at which time the funeral will take place. Following the service, family and friends will gather at Larry’s final resting place at Fairview Cemetery, Mancelona. The family requests everyone to join them after the graveside burial back at Saint Paul for a luncheon and fellowship provided by the Saint Paul’s Women group. Assistance for the funeral is being provided by the Kalkaska Funeral Home and Cremation Services. When someone you love becomes a memory, the memory becomes a treasure. No words can express the loss that is felt for those of us left behind and the love we shared with him. He will be forever in our hearts until that day we meet again.

Lawrence Edward Cook (April 15th, 1935&#8211; April 18th, 2019) entered the Kingdom of Heaven after a battle of dementia and bone marrow cancer. He was able to celebrate his 84th birthday just 4 days before with loved ones, a day filled with... View Obituary & Service Information

The family of Lawrence Edward Cook created this Life Tributes page to make it easy to share your memories.

Send flowers to the Cook family.