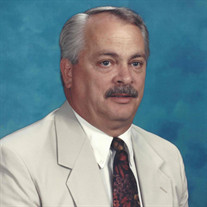 A loving spouse and father, Lary “Coach” Schlaack, of Kalkaska Michigan, was welcomed home to the loving arms of his Lord when he passed away peacefully at his home in the company of his family on the morning of Friday December 11, 2020. He was 84 at his passing and died of natural causes due to late onset Alzheimer’s. He was born in Owosso, Michigan and attended Corunna High School. He married K. Jean Shepherd on July 7, 1956 and they were married over 64 years. Lary was preceded in death by Father; Theodore Schlaack, Mother Irene Schlaack, Brother Gary Schlaack and Sister Betty Lou Sedlacek. He is survived by; his Wife: K. ”Jean” Schlaack and his three Children: son Ted Schlaack (Judith Spouse) of McKinney, Texas, son Jeff Schlaack of Kalkaska, MI and daughter Cindy Schlaack, also of Kalkaska. Grandchildren: Jeffrey Schlaack, Stephanie Schlaack, Christyna Schlaack (Dustin Mason spouse) Brigitte Davis (Tanner spouse), Austin Schlaack (Nina Spouse), Colton Schlaack (Anna spouse) and Logan Schlaack. Great grandchildren: Caiden, Sophia and Kendall Davis, Sadie Lee Schlaack, Jackson Mason, Audrianna and Alex Schlaack. Brother; David Schlaack (Karen Spouse) and Brother in Law, Edward Sedlacek, Sister in Law, Margie Carland, Nephews; Scott Schlaack, Eddie Sedlacek, Charles and Chris Carland Nieces; Wendy Schlaack, Kit Hoffman, Jane Ann Alder and Suki Heistand. Lary also is survived by his dog “Raven” who he loved dearly. Coach received his Bachelor degree in education from Texas Western University and his Master’s degree from Central Michigan University. He taught and coached at Jesuit HS in El Paso, TX; Richmond, Montague, Whitehall, Vanderbilt, Grayling, Stephenson, Algonac, Brethren and Niles Michigan. As well as Kingman Arizona. He worked in Administration in Millington and Lincoln Michigan. Lary sat on the Board of Directors for the Michigan Educational Association as well as the Michigan High School Athletic Association and was the Administrator for the Special Olympics held at CMU for multiple years. With winning records for all of his coaching positions, Lary was known for his, strong disciplines, creative motivation, no-nonsense leadership and sincere concern for “what was best” for all of his students or athletes. For Coach Schlaack, it was important to make a difference in the lives of all he taught, coached or mentored and considered that the most important aspect of his career. Whether you were a student or an athlete, Coach Schlaack always challenged you, but also made it fun to help you become the best person you could be. He was always able to bring out the best in his athletes and students and did make that difference for countless kids. Lary lived his life as a Lutheran. He loved God & Jesus and was an elder or on the board of most the churches where he was a member. In lieu of flowers, memorial donations may be given to the Prince of Peace Evangelical Lutheran Church in Traverse City, MI or the Alzheimer’s Association. The family of Lary Schlaack will honor his wishes and will host a celebration of life for family and friends at a later date. Arrangements have been entrusted to Kalkaska Funeral Home & Cremation Services.

A loving spouse and father, Lary &#8220;Coach&#8221; Schlaack, of Kalkaska Michigan, was welcomed home to the loving arms of his Lord when he passed away peacefully at his home in the company of his family on the morning of Friday December 11,... View Obituary & Service Information

The family of Lary Ted "LT" Schlaack created this Life Tributes page to make it easy to share your memories.

A loving spouse and father, Lary “Coach” Schlaack, of Kalkaska...

Send flowers to the Schlaack family.