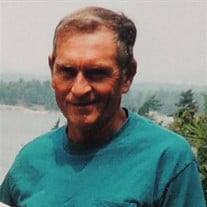 Julian Hal Wheeler, beloved father, husband and friend passed away on September 30, 2017 at the age of 89. He was surrounded by family in the home he and his loving wife built. Julian (“Jules”) grew up in Lincoln Park, Michigan. He served in Korea, and after being wounded on Heartbreak Ridge he was returned to the States. He married the love of his life Doris Jean in 1952 while still enlisted. His interest in machinery began in the repair garage his father owned before the depression and continued throughout his life, including many years as a heavy equipment mechanic. He always enjoyed keeping the machinery running at work and at home. Jules retired from Great Lakes Steel, and in 1988 he and Doris moved to their dream home on Lake Skegemog. Julian was an unselfish father and husband. He devoted his life to making sure his family had a nice home and fantastic vacations all over this beautiful country. Even in all of our travels, we always gravitated to Northwest Lower Michigan as our favorite location. It was a fantastic blessing that he and Doris were able to find a beautiful parcel of land on the chain of lakes to build a new home. The decades of amazing memories he worked so hard to provide are perhaps his greatest gift to us. Julian is survived by his Wife Doris (Domke), sons Mark, Tim, Norm and his wife Lisa (Devereaux), and grandchildren Zackary, Matthew, Ben and Milsa. He is preceded in death by sisters Mariyln and Jean, sons Tom and Rick, and, daughter in law Patti. Dad, many times you have told the story of how Doris Jean waited for you while you were in the army; now it’s your turn to wait patiently for her. In lieu of flowers, memorial donations to the Hospice organization of your choosing are encouraged. They provided wonderful support during a difficult time.

Julian Hal Wheeler, beloved father, husband and friend passed away on September 30, 2017 at the age of 89. He was surrounded by family in the home he and his loving wife built. Julian (&#8220;Jules&#8221;) grew up in Lincoln Park, Michigan.... View Obituary & Service Information

The family of Julian Hal Wheeler created this Life Tributes page to make it easy to share your memories.

Send flowers to the Wheeler family.