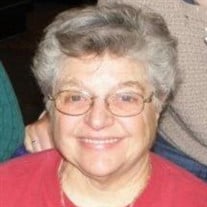 Judy Kay Schlink, 80, of Kalkaska passed away February 26,2022 at the Eden Center in Kalkaska. She was born on April 4, 1941 in Detroit, MI and adopted as an infant by the late Dorthy Braman Schlink and Ralph Schlink. She graduated Garfield Township High School of Engadine in 1959 then went on to N.M.U. in Marquette to study in the practical psychiatric nursing program in 1960. She graduated from North Central Michigan College in Petoskey with an associates degree in science in 1965 and then went on to work at Little Traverse Hospital. Judy was very proud and passionate of her 58-year commitment to nursing (1965-2018) and all those she cared for through those years. She moved to the Kalkaska area in 1997 (after the passing of her mother) and continued her nursing career, working for Harbor Care Associates, taking care of people at home. She was an avid horse rider who participated in distance riding competitions in the 80s through early 90s with her prized horse Kar. Judy had an unending love of trail riding & horse camping with her red toy poodle, Wiggles, and horses Kar, Kourage, Nikki Thor and Tammy for many years. She was part of many trail riding associations (Michigan Trail Riders, Shiawassee Trail Riders, Walk Away Trail Riders) and took many children under her wing, training them in horse riding and inviting them horse camping. Never having married nor having children of her own, these children became like grandchildren to her. Many of these children, now grown up, have fond memories of horse camping with Judy. Although a strongly independent woman, Judy never hesitated to assist anyone in need in her community (and even beyond it) who was struggling. Judy had a fiery personality at times but, most would characterize Judy as “having a heart of gold.” Judy held her dearest friends close as family and looked forward to her yearly Braman family reunions along with holidays spent with Connie’s large family gatherings. Playing dominoes, cribbage and cards were fond pastimes with friends and family. She was a Christian who was a member of Many Rivers Church in Kalkaska for over 25 years. Judy had 3 great loves in her life: Jesus, nursing and horses. In her younger years, Judy saw the beauty if Australia up close & got to see the Bible come to life in her trip to Israel. Now she is with her first love in the presence of God. As Paul wrote in 2 Corinthians 5:8 “We are confident and well pleased to be absent from the body and present with the Lord.” Judy is survived by her half siblings on her mother's side: Fred Caudell (Kathy), Leonard Caudell, Linda Jacobson (Jake), Cathy Cox, and Steven Caudell (Cindy) and on her father's side her step siblings: Keith Caryl, Virgil Caryl, Merton Caryl, Connie Caryl Kennedy (John), Robert Caryl (Tina), Ida Caryl Hofeld (Raymond), Daryl Caryl, Birdie Besey (Steven), Dawn Caryl Jacobson (Benjamin). She is also survived by many cousins on the Braman side and many nieces and nephews. She was preceded in death by her beloved mother Dorothy Braman Schlink in 1997 and her half siblings Gordon Caryl and Helena Caryl Thomas. A memorial service will be held at Many Rivers Church on Friday March 11th, 2022 at 4pm with a potluck to follow in her honor of great food and even better company. Per Judy's wishes she has been cremated and her burial will be later in the spring. In lieu of flowers, memorial contributions may be made in person or mailed to: Many Rivers Ministries PO Box 1121 Kalkaska,MI 49646. We would like to thank Kalkaska Funeral & Cremation Services, Pastor Scott Rhoades, Jodi at the Kalkaska Commission on Aging for all her help & support (you are a peach), her friend Christine for her loyal & caring support, Judy’s good friend Roseanne Jamrok for being so resourceful & present for Judy daily, step sister Connie for all her help and support; Jenna, Robin, Suzie, and Nick at KMHC acute care for their excellent care of Judy, Kalkaska Eden Center and Jen of Heartland Hospice, McGee Equine of Kingsley for taking in her horse and to those who helped by caring for her home and to all her friends and family that called or visited. That meant a lot to Judy. Thank you. “Then I saw heaven opened and behold a white horse. And He who sat on him was called Faithful & True...” Rev. 19:11

Judy Kay Schlink, 80, of Kalkaska passed away February 26,2022 at the Eden Center in Kalkaska. She was born on April 4, 1941 in Detroit, MI and adopted as an infant by the late Dorthy Braman Schlink and Ralph Schlink. She graduated Garfield... View Obituary & Service Information

The family of Judy Kay Schlink created this Life Tributes page to make it easy to share your memories.

Send flowers to the Schlink family.