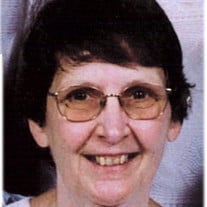 Juanita M. Coon passed away on June 24, 2020. She was the daughter of Lester and Ethelyn (Decker) Dean. She was born, December 30, 1948, in Jeddo, Michigan. Juanita worked in the Kalkaska Public Schools as a cook for 26 years. While employed at the school she served as President of the Support Staff Union for several years. Juanita also did work for Operation Christmas Child under the direction of Franklin Graham and others. She attended the Peoples Church of Kalkaska up until she became too weak. She was a sound system operator for Sunday services and special events, a leader in Women’s Fellowship, and helped with both the church flea market and craft show. She was also President of the Executive Board at one time and would buy supplies for the church as needed. She authored a book titled, “Coldsprings Township Cemetery Kalkaska, Michigan” for the Kalkaska Genealogical Society. Copies can be found in the Kalkaska Library and the Governmental Library in Lansing. She also compiled two books on Kalkaska County obituaries; they were published in 1990 and 1991. Juanita also wrote a book on the history of her family titled, “Dean Family History” in 1987. Juanita always loved going to the Commission on Aging and helping people whenever she could. She also helped the Kalkaska 4-H Archery program as a leader. Juanita is survived by her husband Earl Coon, daughters Elizabeth Coon (Steven Milks and Shannon Milks) and Rebecca (Philip) Chandran, three grandsons Immanuel, Israel and Benjamin Chandran, granddaughter Noelle Chandran, and her brother Richard (Kathy) Dean. She was preceded in death by her parents, six brothers Merritt, Leonard, Jack, Robert, David, and Burton Dean, and two sisters Rosemary Pryzelawski and Dorothy Dean. Cremation will take place and the family may hold a celebration of life at a later date. In lieu of flowers, Juanita has asked for donations to Operation Christmas Child, Samaritan’s Purse, PO Box 3000, Boone, NC 28607. She will be laid to rest in the Coon family lot at the Star Township Cemetery in Alba, Michigan. Arrangements have been entrusted to Kalkaska Funeral Home.

Juanita M. Coon passed away on June 24, 2020. She was the daughter of Lester and Ethelyn (Decker) Dean. She was born, December 30, 1948, in Jeddo, Michigan. Juanita worked in the Kalkaska Public Schools as a cook for 26 years. While employed... View Obituary & Service Information

The family of Juanita M. Coon created this Life Tributes page to make it easy to share your memories.

Send flowers to the Coon family.