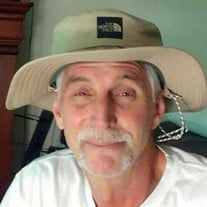 John Andrew McRannolds, 56, of Grawn, MI passed away August 16, 2018 at his home after a year-long battle with cancer. John was born on January 6, 1962 in Kalkaska, MI to the late Joseph A. McRannolds and Mary A. (Cassel) McRannolds of Jacksonville, FL, who survives. John is survived by his three brothers; Joseph (Joe) McRannolds and Michelle Strait of Traverse City, MI., James (Jim) McRannolds and Sister-in-Law Donna McRannolds of Fernandina Beach, FL., and Jeffrey (Jeff) McRannolds of Jacksonville, FL. His Adventurous Life: John was born in Kalkaska, MI in 1962. He attended Kalkaska Public Schools and after graduation went on a 2-year hitchhiking journey throughout the United States. After his return, John married and enlisted in the United States Navy. His tour was aboard the USS Austin LPD-4. He served as an Electronics Technician and was honorably discharged. John’s employment history varied from an Apartment Manager and Landscape Supervisor in Florida to an Electronics Computer Tech in New York City to the Student Mail Carrier while attending college. After returning home to Kalkaska in 2006, he later attended Northwestern Michigan College, where he graduated with an Associates in Science and Arts. His hobbies and activities ranged from pen and ink works of art, playing guitar, running track and field in Kalkaska school sports, rock climbing “free hand” during Navy ports of call, to computer gaming, archery, tennis, basketball and listening to good rock music. If you knew John personally he held four unique qualities; His sense of humor, his booming laughter, doppelganger Sam Elliott, and his unmistakable “gait.” John was also a former Meeting Secretary at Alcoholics Anonymous; the “West Side Group” in Traverse City, MI. John accepted our Lord and Savior Jesus Christ and was renewed in faith before his death by Reverend White from Hospice of Northern Michigan . His Family: John is survived by his former wife and mother of his children, Kim Marrison of Tustin, MI; their children; Johnathon McRannolds of Cadillac, MI; Joseph (Joey) McRannolds of Baraga, MI; Jessica (McRannolds) Rummler and her Husband Ryan Rummler of Cadillac, MI; and Jordan McRannolds and Tricia Hall of Cadillac, MI. His ten grandchildren: Johnathon’s children; Nevin, Johnathon, and Charlie. Jessica’s children; Emma, Stevie, and Oliver. Jordan’s children; Imani, Kaiden, Keiana, and Lailah. Other close friends included his Caregiver and Social Worker Kathy Salenski, her daughter Chelsea Smith, and both their therapy dogs; Mr. Micky and Mr. Miles. John’s father, Joseph A. McRannolds and grandson Logan McRannolds preceded him in death. Service: A family graveside memorial service will be held soon at Evergreen Cemetery in Kalkaska, MI. An additional Memorial and “Celebration of Life” will be held in the summer of 2019. Former classmate and friend, Russell W. Dalton, Professor of Religious Education at Brite Divinity School in Fort Worth, Texas will be officiating. Memorial: Memorial contributions in memory of John may be directed to the AA “West Side Group,” Cherryland Humane Society, and Cowell Family Cancer Center. They are all located in Traverse City, MI. Please visit www.kalkaskafuneralhome.com to visit John’s tribute page and share a memory with his family. Thank you: The family would like to thank the following: Cowell Family Cancer Center; Dr. Ruch, Karen, and the Infusion Clinic staff. Dr. Forester and the Radiation team members. Munson Hospital Palliative Care; specifically, Alisha. A special thank you to Hospice of Northern Michigan; Dr. Zook, Linda – his nurse, and Karen and Loretta – his aides. These special professionals that brought their knowledge, expertise, and equipment were able to substantially decrease John’s pain and suffering from his terminal cancer. Kalkaska Funeral Home and Cremation Services; Bruce Zenner and Darcie Hicks, for their support and consideration during our time of loss. A special acknowledgment and thank you to AA’s “West Side Group” in Traverse City, MI. John’s Favorite Song: https://genius.com/John-lennon-let-it-be-lyrics

John Andrew McRannolds, 56, of Grawn, MI passed away August 16, 2018 at his home after a year-long battle with cancer. John was born on January 6, 1962 in Kalkaska, MI to the late Joseph A. McRannolds and Mary A. (Cassel) McRannolds of Jacksonville,... View Obituary & Service Information

The family of John Andrew McRannolds created this Life Tributes page to make it easy to share your memories.

Send flowers to the McRannolds family.