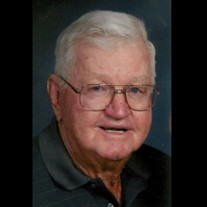 John Fletcher “Bubba” McDowell, 84, of Kalkaska, passed away on Sunday, February 11, 2018 at his home. Bubba was born on January 16, 1934 in Kilbourne, LA to Gurvis and Jewell (Newell) McDowell. He graduated from Kilbourne High School in 1952. He married Minnie Eloise “Tut” Kinney in August 1952. Three children were born to this union. They moved to Kalkaska in 1973. Tut passed away in 1988 after 36 years of marriage. In 1989, he met and married the love of his life Alma Groesser (Anderson) at the All Faith Chapel by Father Fred; and Bubba acquired three more grown children. Bub worked in the oilfields in Odessa, TX. He farmed in Louisiana and pipelined in many more locations. In Kalkaska, he went into business with his brother-in-law Larry and created B & L Hotshot Trucking. In the early 80’s, Bubba and his son Rickey started McDowell & Son’s. He was co-founder and co-owner of Grandview Golf Club. He retired in 1996. Before moving to Kalkaska, he didn’t understand why people would hit a little white ball and then chase it in a pasture. He became addicted to golf and played everyday that ended in “Y”. He and Alma motor homed to Texas for 10 years before building their dream home at the Packsaddle, later The Lighthouse Country Club in Kingsland, TX for another 10 years. Surviving Bubba is his loving wife of 29 years, Alma; children: Donna Gail (Brad) Yohe, John Rickey (Linda) McDowell, Barry Scott McDowell, Renee (Kerry) Creel, Matthew (Sandy) Groesser, and Greg (Valerie) Groesser; his “adopted” son Royce (Terry) Thomas; 15 grandchildren and 14 great grandchildren. He is also survived by his siblings: Claudine Stephens of Kilbourne, LA, Edward Harper (Joyce) McDowell of Kilbourne, LA, Joan Priddy of Vicksburg, MS, James (Barbara) McDowell of Kalkaska; and special nephew Michael (Pet Coon) Stephens of Coffeeville, MS. Visitation will be from 6-8pm on Friday, February 16, 2018 at Kalkaska Funeral Home. Funeral services will take place on Saturday, February 17, 2018 at 11:00am with final visitation beginning at 10am in the Chapel of Kalkaska Funeral Home. Dan Johnson will officiate the service. A luncheon will follow at the Kalkaska United Methodist Church. In lieu of flowers, please donate to Kalkaska Commission on Aging or Father Fred Foundation. Arrangements have been entrusted to Kalkaska Funeral Home and Cremation Services. If you would like to watch Bub's service today, it will be live streamed via our YouTube Channel. Use the following link, then click on the live video feed. We will go live 15 minutes prior to the service. https://www.youtube.com/channel/UCd5ytWq5FzfG45UOfMJwqFw

The family of John "Bubba" McDowell created this Life Tributes page to make it easy to share your memories.

Send flowers to the McDowell family.