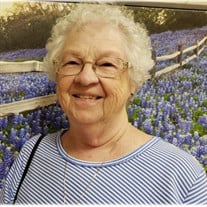 On a beautiful fall morning Joan Cecelia (Ball) Brandon, Wife, Mother, Grandmother, Great Grandmother, Sister, Aunt, and Friend, surrounded by her family at home, joined her deceased love ones on September 28, 2021, and is now in the warm arms of God. Joan was born on January 16, 1938, to Sylvester Ball and Anna Marie (Reiter) Ball in Toledo, Ohio and is survived by her husband Jerry of 60+ years. Joan is also survived by three out of nine siblings and one of two brothers in law: Tom Ball, Ursula (Bob) Frobase, Rita (Gary) Wesenberg, and David (Nancy) Brandon; three children: Jon (Bonnie) Brandon, Julie (Russ) Naasko, Jennifer Brandon (Luis Emmanuelli), numerous nieces and nephews, four grandchildren: Jessica Miller (Craig) McKinnon, Benjamin (Alyse) Kenney, Rachel Kenney, and Jaxom Brandon and one great-grandchild Jaquelynn McKinnon. Joan was preceded in death by her parents and Jerry’s parents James Sr. and Lillian, siblings: Virgil, Josephine, Joseph, MaryAnn, Theresa, and brother in law James Brandon Jr. Joan and Jerry traveled extensively during their 60 years together as Joan was an Air Force Officers Wife and they were stationed all over the United States during his 22 years of service. Joan was a dedicated military wife and performed the role of both parents for many instances when Jerry was called away for temporary duty. They enjoyed many years traveling by motor home after retirement and traveled out of the country on many occasions, just recently giving up their love of adventure and travel. Joan was active in many various activities, including participating as Choir Member with a Church group, Brownie/Girl Scout Leader for her daughters, Kalkaska County Commission on Aging Trout Festival Queen in recent years, St. Mary of the Woods PCCW Member and Prayer Shawl Provider, enjoyed needlepoint and spending time with her grandchildren and recently her great-grandchild. A Funeral Mass will be held at St. Mary of the Woods Catholic Church on Monday, October 4, 2021, at 11:00 am. A graveside service will follow at 1:30 PM. Joan’s family would like to suggest that in lieu of flowers a donation to Kalkaska County Commission on Aging or St. Mary of the Woods Parish be made in her memory. This obituary was lovingly written by the family. Arrangements have been entrusted to Kalkaska Funeral Home and Cremation Services.

On a beautiful fall morning Joan Cecelia (Ball) Brandon, Wife, Mother, Grandmother, Great Grandmother, Sister, Aunt, and Friend, surrounded by her family at home, joined her deceased love ones on September 28, 2021, and is now in the warm arms... View Obituary & Service Information

The family of Joan Cecelia Brandon created this Life Tributes page to make it easy to share your memories.

Send flowers to the Brandon family.