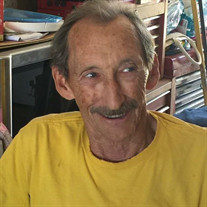 Jimmey Dwayne VanAmburg, 68, of Englewood, Florida, formerly of Kalkaska, passed away on February 15, 2017. He was born to the late Elmer James “Pete” and Edith Marie (Sherlock) VanAmburg on August 30, 1948 in Kalkaska. Jim met his wife Patricia Marie Strohmier in 1980, who was also a lifelong resident of Kalkaska. They were married in 1984 and had one son, Jimmey Dwayne VanAmburg II. Jim graduated from Kalkaska High School in 1967, and then served in the US Army from 1968 to 1974. He was a very proud Vietnam Veteran. After returning, he worked in the Oil Field for many years, until returning to carpenter work, which he loved. He retired in 2007, but continued woodworking and making things for his friends and family. Some of Jim’s interests were; softball, golfing, hunting, fishing, woodworking, camping, and working in the garden. His greatest joys included teaching his son to fish, hunt and find all the two-tracks around Kalkaska. Being at every football game his grandson Charlie played, he was his biggest fan. (Go Bandits!) He also enjoyed spending time in the garage tinkering, tearing apart and putting back together many remote control cars and boats with his youngest grandson Austin. He was loved by all children and was truly one of a kind. Jimmey is survived by his wife Patricia Marie VanAmburg , son Jimmey “Abe” Dwayne VanAmburg II, 2 grandsons; Charles Dwayne and Austin Troy VanAmburg, all of Englewood, FL, step daughter from a previous marriage Garnette Elizabeth (Dunnebeck) Pobud of Mancelona, sisters; Janet (Jim) Johnson of Saline and Anna Mae (Dave) Bell of Kalkaska, brother in law Don Murden of Kalkaska, and many nieces and nephews and great nieces and nephews. He was preceded in death by his parents and his sister Ruth Irene Murden. A graveside service will take place at Evergreen Cemetery on July 9, 2017 at 2:00 pm, with a picnic to follow at the Log Lake Pavillion.

The family of Jimmey Dwayne VanAmburg created this Life Tributes page to make it easy to share your memories.

Send flowers to the VanAmburg family.