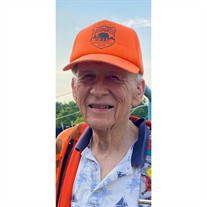 Not sure what to send?

On January 27, 2022, while spending the winter in Florida with his children, Jerry Brandon joined his deceased loved ones and is now in the warm arms of God. Jerry was surrounded by his children Jon, Julie, Jennifer, his Brother Dave and his wife Nancy and Granddaughter Jessica. Jerry was born on May 9, 1937 to James and Lillian Brandon in Toledo, Ohio. Jerry lost Joan his wife, the love of his life for 60 + years in September 2021. Jerry (retired at the rank of Major with the United States Air Force) and Joan traveled extensively during their 60 years together. They were stationed all over the United States during Jerry’s 22 years of service. Jerry flew 53 combat missions over Vietnam from April to August 1969 while flying Arc-Light Missions as a Bomber Navigator in a B-52 Bomber. Jerry retired from Wurtsmith Air Force Base in Oscoda, Michigan in 1981 and then worked for the Alcona Commission on Aging in Lincoln, Michigan. Jerry and Joan relocated to the Kalkaska, Michigan area in 1997. They enjoyed many years traveling by motor home after retirement and traveled out of country on many occasions, just recently giving up their love of adventure and travel. Jerry was an avid Skeet Shooter and enjoyed hunting for turkeys and deer in most recent years. Jerry enjoyed field trials with his Brittany Spaniels and bird hunting with them as well. Previously he enjoyed hunting trips with his brother David for elk out west in Wyoming and hunting for antelope in South Dakota with his family. He enjoyed working with the Boy Scout Organization and was the Loring Air Force Base Scouting Project Officer in Limestone, Maine. Jerry was active with the Kalkaska Commission on Aging and could be found playing Euchre whenever possible. Jerry is survived by one Brother David (Nancy) Brandon, one Brother in Law Tom Ball, two Sister In Laws Ursula (Bob) Frobase, Rita (Gary) Wesenberg and three children: Jon (Bonnie) Brandon, Julie (Russ) Naasko, Jennifer Brandon (Luis Emmanuelli), four grandchildren: Jessica (Craig) McKinnon, Benjamin (Jonquil Alyse) Kenney, Rachel Kenney and Jaxom Brandon and one great grandchild Jaquelynn McKinnon and numerous nieces and nephews. Jerry was preceded in death by his wife Joan, his parents, Joan’s parents Sylvester and Anna Ball, Brother James Marion Brandon Jr., Brothers in Law Virgil Ball and Joseph Ball, Sisters in Law Josephine Rinehart, MaryAnn Scalaro and Theresa Hennessey. In lieu of flowers, a donation to Westminster Presbyterian Church in Harrisville, Michigan, Kalkaska County Commission on Aging or VFW Post 8684 in Kalkaska maybe made in his memory. A celebration of life will be held on Saturday, July 9, 2022 in Kalkaska, Michigan. A mass will be offered at 11 am at St. Mary of the Woods Catholic Church, luncheon immediately following at Land O’Lakes VFW Post 8684 and internment at St. Mary of the Woods Cemetery will follow with full military honors. Arrangements were entrusted to Kalkaska Funeral Home and Cremation Services.

On January 27, 2022, while spending the winter in Florida with his children, Jerry Brandon joined his deceased loved ones and is now in the warm arms of God. Jerry was surrounded by his children Jon, Julie, Jennifer, his Brother Dave and his... View Obituary & Service Information

The family of Jerry Allen Brandon created this Life Tributes page to make it easy to share your memories.