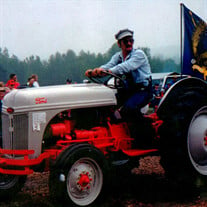 James “Jim” Harley Webber Jr. The world lost a kind soul, a sailor, and a friend when James “Jim” Harley Webber, Jr. 63, of Kalkaska, died Tuesday, Nov. 18, 2014. Everyone who knew him will long hear his laughter echo in their minds and will celebrate the life of a man whose kindness and positive spirit was inspiring. Jim loved bib overalls, his country, his tractors, his dogs, his farm, his camping trips and good cinnamon rolls. But more than anyone or anything he loved his wife of 38 years Shirley Webber, his daughter Tiffany Anne Ferguson and his four grandchildren Emma, Madalynn, Nolan, and Caroline. Tiffany preceded him in death. Jim was born April 25, 1951 to the late James H. Webber Sr. and Avalon Maree Schanzenbaker in Battle Creek, Mich. His sister Victoria Brown preceded him in death. His sister Shelly (Gene) Dake survives him. Jim was proud of his service to his country as a submariner on the U.S.S. Sam Houston in the U. S. Navy. He went on to help many other young men find their way to a life of service and patriotism. He worked for the Kalkaska County Department of Public Works as well as Carquest Auto Parts. He was a member of Northern Antique Flywheelers and attended their annual show for more than 20 years. For many years he assisted with the Kalkaska Winterfest. He was also a member of the National Rifle Association. Jim was a key fixture in the International Weight Pull Association, a weight pulling organization for people and their dogs. He was also handled all of the equipment for the Northern Great Lakes Weight Pullers group. He was a chief judge and judged many weight pulls around the state. His many friends often heard Jim say “If I can’t fix it, it’s not broken.” This was true. He could fix nearly anything. He used this gift regularly to help many people in need. He often came to the aide of friends, neighbors and even strangers offering his assistance and helping make their lives a little better. A memorial service for Jim and his daughter Tiffany will be held at 11 a.m. Saturday, Dec. 13, 2014 at the Kalkaska Church of Christ, 1725 W. Kalkaska Rd., Kalkaska, Mich. 49646. For information about any additional service or visitation, please visit www.kalkaskafuneralhome.com. Arrangements have been entrusted to Kalkaska Funeral Home and Cremation Services. The family requests those remembering Jim offer an act of kindness to someone in their community. And for those who are so inclined, donations to the Tiffany Ferguson Memorial Fund to support the needs of Jim’s grandchildren are also welcome.

The family of James Harley Webber Jr. created this Life Tributes page to make it easy to share your memories.

Send flowers to the Webber family.