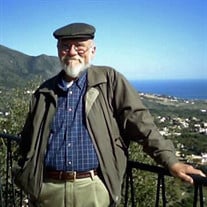 James Lewis LeBlanc, 77, of South Boardman, passed away on Wednesday, April 8, 2015 at his home. Mr. LeBlanc was born on March 6, 1938 in Highland Park to the late Phillip and Edna (Booth) LeBlanc. From an early age Jim developed an appreciation for knowledge; especially history, music, and how to serve others. He enjoyed singing and in his youth he sang in the Boys Choir and continued on to sing at the Westminster Church in Detroit for over 20 years. He specifically enjoyed classical music. Jim loved to read, collecting many books through the years, and studying history on wars, the English, and eventually his own family genealogy. This was furthered through travel, which both Mary and Jim enjoyed together. His favorite places were his trips through Spain and England. Jim was known for his strong social conscience and always wanted to help others in need. He worked over 36 years for the State of Michigan in the Department of Social Services. He was also active in the Lions Club and Preservation Wayne, a group based in Detroit to preserve and promote the rich history of the city. Throughout all of these ventures and dedication to serving others; Jim will be best remembered by his family as kind, gentle and funny. He was a wonderful father and always put his family first. Jim is survived by his wife Mary (VanVels) LeBlanc; his three daughters Kristin (Deb Beechy) LeBlanc, Alicia (David) Rowney, and Pecol Green; grandchildren Rhys Green, Madeline and Thomas Rowney; and his brother John (Virginia) LeBlanc. Jim was preceded in death by his parents Phillip and Edna LeBlanc. Memorial contributions may be made in Jim's honor to Preservation Detroit, 4735 Cass Avenue, Detroit, MI 48201, you may go to www.preservationdetroit.org to donate or contributions may also be made to Westminster Church of Detroit Chancel Choir, 17567 Hubbell Ave, Detroit, MI 48235 . A memorial gathering will be held at 2:00 p.m. on Sunday, April 12, 2015 at Kalkaska Funeral Home. Arrangements have been entrusted to Kalkaska Funeral Home and Cremation Services.

James Lewis LeBlanc, 77, of South Boardman, passed away on Wednesday, April 8, 2015 at his home. Mr. LeBlanc was born on March 6, 1938 in Highland Park to the late Phillip and Edna (Booth) LeBlanc. From an early age Jim developed an appreciation... View Obituary & Service Information

The family of James Lewis LeBlanc created this Life Tributes page to make it easy to share your memories.

James Lewis LeBlanc, 77, of South Boardman, passed away on Wednesday,...

Send flowers to the LeBlanc family.