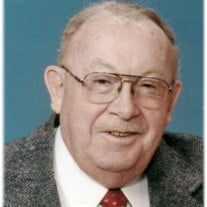 James Colburn Tuffts (85) of Kalkaska, MI died peacefully at home on January 9, 2020. He was born on February 10, 1934 at 1lb 9oz to Clarence and Eva Belle Baird of South Boardman, MI. Jim’s mother passed away when he was two years old and his mother’s cousin Edith and her husband R.G. Tuffts then adopted him. Jim grew up with his older sister Verna and his younger sister Belva, working on the family farm and helping his dad to build his family home on Crofton Rd. Later in his childhood Jim met his six siblings whom he treasured; Jack, June, Elva, Millie, Dorothy and Margaret who also had been adopted by other families. Jim met Doris Root in school where they both graduated from Kalkaska High School. They were married on May 15th, 1954 before he enlisted in the Army and went to Germany to serve during occupation. Jim and Doris first had a daughter Victoria, and then came Susie and they finished their family with their son Joe. Jim worked many jobs, providing for his family including working in the meat department at Glen’s Market, working in Cone Drive and eventually finishing out his working days at the Kalkaska County Road Commission where he retired. Jim never met a stranger and one of his favorite pastimes was to make a new friend. Jim loved his family the most, enjoying backyard bbq’s, Trout Festival and Memorial Day get togethers, family time out at Lake Leelanau, hunting with the guys, bowling with friends, dinner at the Moose, and good ol’ fashioned back porch dancing to the radio. Jim loved to sing the old hymns in church to his Savior as loud as he could from the heart, with it never getting old. The “Old Rugged Cross” was his favorite and you could see a tear in his eye when he sang. Jim loved to put on a magic show to entranced little ones and he always said there was no better sound than a child’s laughter. He was always ready with a treat on hand, a magic quarter behind the ear, or mysteriously blessing strangers with food and money. He knew how to work hard and how to love sacrificially. He loved his wife and was very proud of his kids, grandkids and great grandkids. Jim is proceeded in death by his wife Doris, his parents, his siblings Verna, Jack, June, Elva, Millie, Dorothy, Margaret and his granddaughter Korena England. Jim leaves behind his daughters Victoria (Mark) Harden and Susan (Tim) Dorman, his son Joseph (Elaine) Tuffts and his sister Belva (Gale) Parker, as well as his grandchildren Jennifer (Bill) Algier, Tom (Oana) Miller, Timberlie (Trent) Yanz, Josh England, Hollie (Scott) Bittenbender, Brenda (Chris) Henriet, Jimmy Tuffts, Monique Bonomo, Lannie Mateo, Irene (Brent) Rogers and Christopher Fast, and many great grandchildren. Visitation will be Sunday, January 12, 2020 at Kalkaska Funeral Home from 3-6 PM. A funeral will be held at 11 AM on Monday, January 13, 2020 at the Kalkaska Church of Christ. The family will receive friends beginning at 10 AM until the time of service. Arrangements have been entrusted to the Kalkaska Funeral Home and Cremation Services.

James Colburn Tuffts (85) of Kalkaska, MI died peacefully at home on January 9, 2020. He was born on February 10, 1934 at 1lb 9oz to Clarence and Eva Belle Baird of South Boardman, MI. Jim&#8217;s mother passed away when he was two years old... View Obituary & Service Information

The family of James "Jim" Colburn Tuffts created this Life Tributes page to make it easy to share your memories.

Send flowers to the Tuffts family.