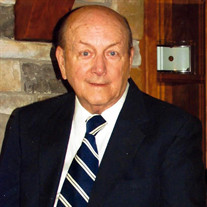 Jack M Spencer, 88, died in his home on May 6th, 2018 in Elk Rapids, Michigan due to congestive heart failure. Jack was born on June 1st, 1929 in Ann Arbor, Michigan to his parents, William F. Spencer and Jean (Hislop) Spencer. He graduated from University High School in 1947 in Ann Arbor before attending Western Michigan University. Jack joined the US Air Force in 1952 and attained the rank of Master Sargent while serving as an aircraft specialist in Sitka, Alaska during the Korean War. Jack Married Lillian “Dean” (McCall) Spencer in 1956, and they spent their married life together in San Diego, California and South Lyon, Michigan before moving to the Kalkaska area in 1960. Jack and Dean enjoyed owning and operating many area businesses together including Taffletown, Deano’s Pizza and Country Lanes Bowling. Jack and Dean enjoyed a long and active retirement together, and especially enjoyed socializing with their many friends who wintered with them in Las Vegas, Nevada and carefree summers with friends and family on their beloved Horse Island in Ontario, Canada. Jack is survived by his four children Darby (William) Kelso of Traverse City, David Spencer of Elk Rapids, Gail (Dennis) Grammer of Elk Rapids, and Doug (Holly) Spencer of Elk Rapids. Jack enjoyed his grandchildren Troy (Courtney) Brazie, Nicole (Derrick) Olson, Natasha (Volodymyr) Miakhtinova, Olena (Russell) Wallace, Blair (Michael) Misico, Cassen (Ryan) Hairston, Kaitlin (Nicholas) Lucero and Jack, Luke & Owen Spencer, and his 9 great-grandchildren. He is preceded in death by his wife, Dean. Visitation will take place at the Kalkaska Funeral Home on Thursday May 10th, 2018 from 6:00 to 8:00 pm. A funeral service will take place on Friday, May 11th at 3:00 pm, with additional visitation on Friday from 2:00 – 3:00 pm. All are welcome to attend and celebrate Jack’s life. In lieu of flowers, please donate to Hospice of Michigan.

Jack M Spencer, 88, died in his home on May 6th, 2018 in Elk Rapids, Michigan due to congestive heart failure. Jack was born on June 1st, 1929 in Ann Arbor, Michigan to his parents, William F. Spencer and Jean (Hislop) Spencer. He graduated... View Obituary & Service Information

The family of Jack M. Spencer created this Life Tributes page to make it easy to share your memories.

Send flowers to the Spencer family.