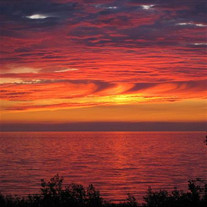 Doctor Jack Alden Fiebing died on April 20, 2016 at the age of 94. It's said that a society grows great when old men still plant trees. Jack planted trees as long as he could and helped make this society greater. Just as with the black walnuts and pines that he placed in the ground, he cared for and nourished his family, friends and patients, Jack was a doer and a maker. He spent more time building paths to his beach than sitting by the water. He split wood to heat the house until he could no longer hold an axe. He would show you how to craft a poem on the same day as he demonstrated how to pound in a nail. He taught his children and grandchildren math by playing cribbage with them on his homemade wooden boards. He put people to sleep. Many patients, doctors and nurses remember the reassuring ease he had during his lifetime as an anesthesiologist at Munson and Leelanau Memorial hospitals - sometimes knitting blankets while sitting alongside a patient monitoring their recovery. Meanwhile, his grandchildren were often put to sleep listening to his perfect melancholic impressions of Winnie-the-Pooh's Eeyore. Born in Traverse City on July 16, 1921, to Charles E. Fiebing and Marie L. (Weineke), Jack delivered milk at an early age for the family business, Ideal Dairy. He attended college at Central Michigan University and graduated from the University of Michigan earning a medical degree in 1946, then served in the U.S. Navy. He married Irene H. (Tahvonen) in 1948, and they were together until her death in 2009. He will always be remembered for his taciturn laughter, the inlaid wooden floors he made, the views from the cottage and the skills he passed on. He would not want you to mourn his death. He lived well and did great things. He wrote one of his parting wishes as, "I am old. I have lived. There is a time to live and a time to die. Let me." He left instructions for his remains as follows: "Toss the ashes to the wind when there's a gale blowing from the west and you're standing at the base of the bluff in front of the cottage at Northport." People wishing to honor Jack's life are advised to plant a tree. Jack was preceded in death by his wife, Irene; and his brothers, Ray and Charles. He is survived by his three children, Mary Fiebing Thuemmel, Kate Fiebing (Bill Craig) and Jon Fiebing (Lina Cabenez); his eight grandchildren, Andy Thuemmel, Kate Thuemmel, Jess Piskor (Michelle Ferrarese), Laura Piskor-Laflamme (Pat), Lydia Craig, Jake Fiebing, Ryan Fiebing and Stephanie Fiebing; and his three great-grandchildren, Etienne Laflamme, Rudolfo James Ferrarese Piskor and Pollyanna Parker Piskor-Laflamme. A memorial service will be held at a later date. Arrangements are being coordinated with the aid of Kalkaska Funeral Home and Cremation Services.

Doctor Jack Alden Fiebing died on April 20, 2016 at the age of 94. It's said that a society grows great when old men still plant trees. Jack planted trees as long as he could and helped make this society greater. Just as with the black walnuts... View Obituary & Service Information

The family of Jack Alden Fiebing created this Life Tributes page to make it easy to share your memories.

Send flowers to the Fiebing family.