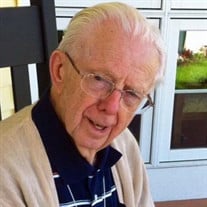 Gordon Everett Leepart, 93, of Kalkaska, Michigan went home to his Lord and Savior on Friday, February 16, 2018. He was born in Glen Willow, Ohio on January 18, 1925 to the late Frank and Frances (Forman) Leepart. He served as a Corporal in the US Army during World War II as a POW camp guard. He married Ingara Grace (Knowlton) in December of 1945. Gordon was a tool and die maker, and retired from General Motors in Flint, Michigan. He will always be remembered for being a loving and devoted husband, father, grandfather and uncle. For most of his life, friends and family called him "Mick". Gordon was a sweet, kind, and gentle man. He was a gentleman with a special way of touching the hearts of people who got to know him. Gordon was a devoted Christian who enjoyed going to Good News Camp with Grace and, as a volunteer, helped wherever he was needed. Gordon loved to make people laugh and expressed that he wanted that to be his legacy. He had a quick wit and wonderful sense of humor. Gordon had quite a collection of great jokes and knew just when and how to tell them. He enjoyed fishing, and loved playing golf just for the fun of it. Gordon is survived by his children, Craig Leepart, and Dian (Edward) Hungness; grandchildren, Mark (Kimberly) Glyshaw, Jerry Leepart, Danielle Leepart, and Tyler Dennison; great grandchildren, Kayla, Noah and Josiah Glyshaw. He is also survived by his sister Darlene (Ron) Lute; his sister-in-law, Mary Knowlton and many nieces and nephews. Gordon was preceded in death by his parents; his wife, Grace; son, Jerry Leepart; brothers, Charles Leepart and Wilfred Leepart. A private burial will take place at Roselane Cemetery in Toccoa, Georgia. In lieu of flowers, Memorial Contributions may be made, In Memory of Gordon and Grace Leepart, to Hospice of Michigan. Arrangements have been entrusted to Kalkaska Funeral Home and Cremation Services.

Gordon Everett Leepart, 93, of Kalkaska, Michigan went home to his Lord and Savior on Friday, February 16, 2018. He was born in Glen Willow, Ohio on January 18, 1925 to the late Frank and Frances (Forman) Leepart. He served as a Corporal in... View Obituary & Service Information

The family of Gordon Everett Leepart created this Life Tributes page to make it easy to share your memories.

Send flowers to the Leepart family.