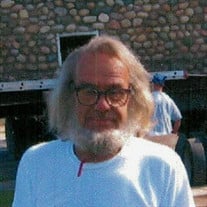 Gordon Keeney Jr. left his body behind early Sunday morning January 15, 2017 as he went on to be with the Lord in Glory. If you confess with your mouth that Jesus is Lord and believe in your heart that God raised him from the dead, you will be saved. For it is by believing in your heart that you are made right with God, and it is by confessing with your mouth that you are saved. Romans 10:9-10 For “Everyone who calls on the name of the Lord will be saved.” Romans 10:13 Gordon was born on April 7, 1932 in Lansing to Bethel Avery and Gordon Keeney Sr. In his elementary years they moved to Cedar Lake where he finished his schooling. He joined the Army and served in the Korean War. When he came back from the service he worked with his dad moving buildings. He married Charlotte Gabriel and started a family. After taking over the business “Central State Building Movers”, he settled in South Boardman, moving many buildings in the surrounding counties. He was very good at his unique trade, and enjoyed it. He was proud of the work he did and was always happy to swap stories. He was known as “Whiskers” to a lot of folks. He was generous and would help anyone and loved being in on a good joke. He always enjoyed going to auctions, stopping by coffee shops and going to the Buckley Steam Show. He was a member of the International Association of Structural Movers and traveled to many of their conventions. Gordon is survived by his children; Karen Warren, Kalvin (Sheila) Keeney, and Linda (Terry) Dodge, Grandchildren and great grandchildren; Angie and Michael, Bayley, Harlee, Gage, Kim and Charlie, Zayne, Ethan, Dustin, Brooke and Tom, Brittan and Chucky, Savannah and Jazmyn, Misha and Anya, and his brother Elden Keeney. He was preceded in Glory by his wife Charlotte and daughter Lisa. And I believe if he could say anything from his heavenly home it would be, to not put off your decision that would secure your eternity. Eternity doesn’t change because you choose not to believe but believing in the One who redeemed you will change where you spend eternity. Arrangements entrusted to Kalkaska Funeral Home and Cremation Services.

Gordon Keeney Jr. left his body behind early Sunday morning January 15, 2017 as he went on to be with the Lord in Glory. If you confess with your mouth that Jesus is Lord and believe in your heart that God raised him from the dead, you will... View Obituary & Service Information

The family of Gordon Albert Keeney Jr. created this Life Tributes page to make it easy to share your memories.

Send flowers to the Keeney family.