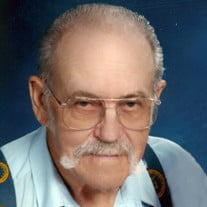 Gerald “Jerry” Douglas Gaultier, 86, of South Boardman, passed away Sunday, September 13, 2020. Gerald was born at the family home in South Boardman to the late Vere “Tony” and Eleanor (Johnson) Gaultier on April 11, 1934. He graduated from Kalkaska High School in 1952; he was the class president and a member of the National Honor Society. After high school Jerry attended Michigan Tech University for two years. Jerry married the love of his life, Elaine Brockway, on October 15, 1954. He proudly served in the US Air Force; training as a B-47 jet mechanic where he achieved the highest class standing. He served in the Strategic Air Command for the 344th Bombardment Squadron and later served as an Air Force Reservist in the Traverse City unit. Jerry primarily worked in construction and excavation throughout his career, he was also able to do surveying, drafting, and was a natural mechanic who could use whatever he could find to fix something. In what little spare time Jerry could find he loved to be outdoors, especially in the upper peninsula; whether it was hunting, trout fishing, muzzle loading, or going to the Oshkosh Air Show. He enjoyed his tractors, was a gun enthusiast and a member of the NRA for 46 years. Jerry was always an extremely generous person and gave of himself and his time to anyone in need. Jerry attended the South Boardman United Methodist Church for his entire life, where he served many years as a board member. He served on the Kalkaska Memorial Health Center’s Board of Trustees for 46 years; Jerry was a visionary for the hospital and was instrumental in its continuation and expansion through the years. He also served as the Boardman Township Supervisor for 45 years. He was a longtime member of the Kalkaska Kiwanis Club and the South Boardman American Legion, served as a County Commissioner for a term, and on the South Boardman School Board. Gerald will lovingly be remembered by his wife Elaine, children Douglas Gaultier, Shaleen Gualtieri, Toni Gaultier and Melanie McTaggart, five grandchildren, 7 great-grandchildren, siblings Rodney (Wanita) Gaultier and Judith Gualtieri. He was preceded in death by his parents. A graveside service will be held Thursday, September 17, 2020 at 2:00 pm at Boardman Township Cemetery in South Boardman. Arrangements have been entrusted to Kalkaska Funeral Home and Cremation Services.

The family of Gerald D. Gaultier created this Life Tributes page to make it easy to share your memories.

Send flowers to the Gaultier family.