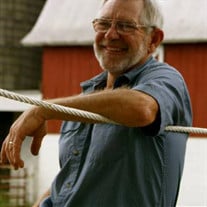 George Loren Shetler, of Shetler Family Dairy, passed away unexpectedly on January 14th, 2019. He was born on May 17th, 1951 in Connellsville, PA to the late Rollin and Sarah Shetler. They lived in Scottdale, PA until 1959 when they moved to the Clare County Mennonite Community where George attended Clare Schools for his junior high years. He then went to Beaverton High School his freshman and junior years. George was active in farming and 4-H during this time, the family then moved to Elk Rapids where he graduated high school in 1969. After graduating, he attended NMC for auto mechanics where he met his best friend Stanley Groner. George then chose Boys Village in Wooster, OH for his voluntary service during the Vietnam War. He then met the love of his life, Sally Ann Zook, who he married on March 31st, 1973. They lived in Ohio for their first year of marriage then moved to Kalkaska where they eventually bought the farm on Tyler Rd in 1979. He and Sally worked alongside each other turning a simple dairy farm into the bottling business that it is today. He was active on the Kalkaska County Conservation Board for years and served a term as chairman for the Kalkaska Board of Commissioners. George is survived by his two daughters: Stacia (Jason) Davis and Annie (Justin )Olds; three sons: G. Kaleb (Traci) Shetler, J. Jacob (Priscilla) Shetler, and Peter (Darcy) Shetler; twenty grandchildren: G. Gregory(Rachel) Shetler, Ivy Hart, Tyrone Shetler, Elizabeth Shetler, Gabriel Shetler, Bodee Hart, Mariah Shetler, Alexis Shetler, Jadon Shetler, Jenna (Jacob) Verstraete, Kadence Davis, JaeAnn Davis, Luke Olds, Evelyn Olds, Sidney Shetler, Andrew Shetler, Jackson Shetler, and Owen Shetler; Four great-grandchildren: G. Frederico Shetler, Ronald Shetler, Greyson Verstraete and Sadie Verstraete; and two sisters: Ruth (Claude) Green and Bernice Gerber. George is preceded in death by his father Rollin Shetler, Mother Sarah Shetler, sister Rebecca Shetler, grandson Jonathan Shetler and wife Sally Ann Shetler. In lieu of flowers memorial contributions may be made to WLJN Christian Radio, Traverse City. Visitation for George will be held on Friday January 18, 2019 from 5:30 pm to 8:00 PM at the Kalkaska Funeral Home. The funeral service will be held at 11:00 AM on Saturday January 19, 2019 at the Kalkaska Church of Christ with final visitation from 10:00 AM to 11:00 AM. Arrangements have been entrusted to the Kalkaska Funeral Home and Cremation Services.

George Loren Shetler, of Shetler Family Dairy, passed away unexpectedly on January 14th, 2019. He was born on May 17th, 1951 in Connellsville, PA to the late Rollin and Sarah Shetler. They lived in Scottdale, PA until 1959 when they moved to... View Obituary & Service Information

The family of George Loren Shetler created this Life Tributes page to make it easy to share your memories.

Send flowers to the Shetler family.