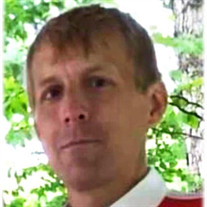 It is with heavy hearts, that we announce the passing of a loving, caring husband and a doting, awesome daddy. Gary Michael Crowley, 40, of Mancelona, passed away on November 3, 2021. He was born in Traverse City on February 15, 1981 to Michael Crowley and the late Sharon (Aldrich). On October 6, 2012, Gary married his best friend and the love of his life, Sara (McCoy) Crowley. Together they had a daughter, Aubree who was his world. Gary liked to hunt and fish as a kid. He passed his love of nature down to his little girl. Together, they spent many hours with fishing poles at their favorite fishing hole. Gary was an exceptional bowler and softball player. Even though he bowled a perfect game 6 times, softball was his passion. It was on the field that he and Sara had the most fun. Anytime nephews Collin and Clayton would be around, Gary could be found playing softball with the kids, tirelessly and with the patience of a saint. Gary was also a favorite uncle to Bentley and Holden; when they were younger, he was often seen walking with them or carrying them around for hours. Gary will lovingly be remembered by his wife Sara; daughter Aubree; dad Mike (Julie) Crowley; sisters Leanne (Tony) Legato and Linda Chernault; brother Nic Crowley; nieces and nephews: Kala, Jacob, Tyler, Timmy, Collin, Clayton, Bentley and Holden; father and mother-in-law Norm and Kelly McCoy; brother-in-law Joshua (Melanie) McCoy; sister-in-law Kelsey (Mark) Alexander. We are comforted at the thought, that Gary was met at the pearly gates of heaven by his beloved mother Sharon. What a joyous reunion that must have must have been! He missed her so much. A memorial service for Gary will be at 10:00am on November 20th at Saint Mary of Hannah Catholic Church in Kingsley, Michigan. A luncheon will follow at Saint Patrick’s Catholic Church in Grawn, Michigan. Aubree has requested that everyone wear blue - her daddy’s favorite color. Arrangements have been entrusted to Kalkaska Funeral Home and Cremation Services.

It is with heavy hearts, that we announce the passing of a loving, caring husband and a doting, awesome daddy. Gary Michael Crowley, 40, of Mancelona, passed away on November 3, 2021. He was born in Traverse City on February 15, 1981 to Michael... View Obituary & Service Information

The family of Gary Michael Crowley created this Life Tributes page to make it easy to share your memories.

It is with heavy hearts, that we announce the passing of a loving,...

Send flowers to the Crowley family.